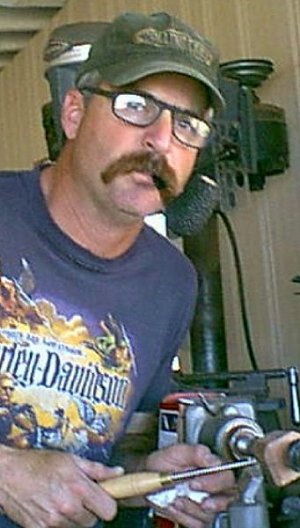 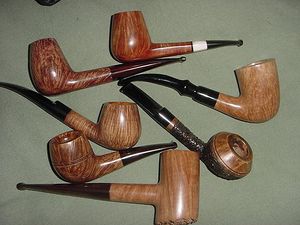 The following text and pictures are qouted from Robert Vacher's former eBay shop:

"Hello from the Laughingmoon pipe workshop in the lovely high desert of North East California. My name is Robert Vacher and I will be guiding you through the tour. So sit back and relax (smoke if ya got 'em) and enjoy the pics.

I started smoking a pipe in 1985 at the tender age 24 after many years of admiring the pipes smokers in my life. I was lucky to live near a mall in Sacramento called Birdcage Walk that had a fine pipe shop by the name of The Trade Winds where the award winning local carver Joe Mariner sold some of his pipes. I spent alot of my mis-spent youth hanging around and coveting them.

Well in 1986 I had a chance meeting with another local carver Ted Lewis. Mr. Lewis had been carving pipes since the 50's and was nearing retirement from the Union Pacific RR where he was machinist. We hit it off well and he asked if I would like to learn how to carve pipes, to which I replied a resounding 'YES'. He had me over the next morning and I stayed there until after dinner. It was a wonderful feeling of accomplishment to have a new pipe that night that I had made from scratch. We became fast friends and I made a few more over the next 6 mos.

At this time I got a job as a taxi driver in Sacramento and my pipe making dropped off to nothing due to the constraints of time. Two years later I got a job as a truck driver and was gone from my hometown for a few years and lost touch with Ted, but not with my desire to carve pipes. In 1996 I got a job with the State of California and moved from Sac to Susanville which is in the upper NE part of the state. On a trip to visit relatives I tried to get in touch with Ted as now I had the time to carve again, but he had since retired and moved from his home.

But then the internet and all it's vast power came to my rescue and I was able to track him down in Ft. Bragg CA where he was using his machinist talents to make electric deep sea fishing reels that plug into the cig lighter on your boat. After a time we were able to hook up and he sold (virtually gave) me his machinery, most of which he designed/built himself and his remaining stock of briar that he had purchased from Joe Mariner in the early eighties, and about 300 stems. 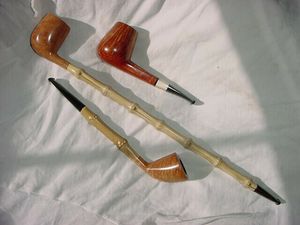 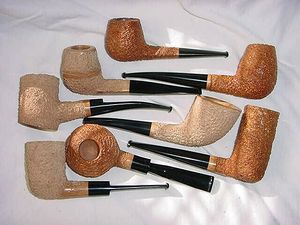 Now that takes us up to about November of 1998. In early 99 I bought 1/2 a bag of briar from Mark Tinsky at American Smoking Pipe Co., which is when my pipe making really took off in earnest. Now you are probably asking your self 'why did he choose a name like that, it sounds more like one of them glass pipe NOT for Marijuana pipes that they always flood the pipe section with' names. It's like this. I was with my 2 kids at the local bead shop and I figured that while they look for the latest bead thing I might find some useful pipe making thing, which I did and it is the smiling moon medallion you see in the picture with the pipes. They also had a moon and star jewelry stamp so I figured 'Hey, I can kill 2 birds here with a stamp and a trinket thingy, so what the hey' and I didn't want any confusion with the Missouri Meerschaum people's site so smilin' was out, but Laughing was in.

Now we both know that you could spend more, A LOT MORE, on a pipe, but as you know they are just a piece of wood with 2 holes in 'em, that you burn tobacco in and you shouldn't HAVE to spend a days take home pay or more on one. So I have tried to give the Blue Collar guy a chance to own a really nice pipe without having to choose between prescription drugs, heating oil, or food for his family and a GOOD smoke.

MISSION STATEMENT: I believe that EVERYONE who desires to smoke a handcrafted pipe should be able to buy one regardless of their station in life. There is no reason why the janitor in a highrise should not be able to smoke the same pipe as the owner of that building. My pipes are made for, but not limited to, the people who make up the backbone of this world. The people who get up every day and get the job done. I just want you to know that when I make YOUR pipe,I made it with YOU in mind. So in the future, as in the past, I will make super-affordable pipes for those who enjoy them.

So if that is what you are looking for, give me a chance to prove it you. Well that's about it, I hope you had a good time and THANK YOU for looking."