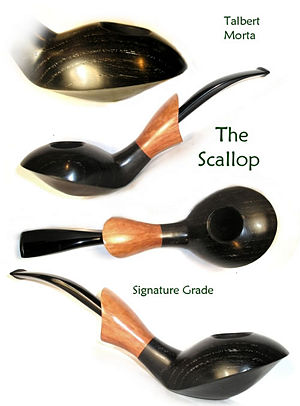 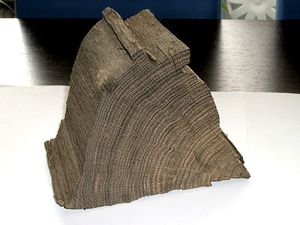 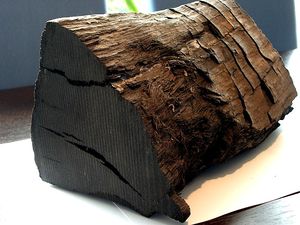 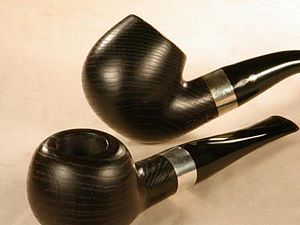 Several pipe makers are using Morta, which is an excellent material for pipe making. Morta, or bog oak, is partially petrified oak that comes from trees that have fallen into peat bogs. Being buried in the peat bog preserves the wood from decay due to the bog's acidity and anaerobic conditions. Over the course of time, tannins are leached out, leaving the wood in the early stages of fossilization. If the process continues, the wood would eventually turn into lignite and coal, a process that takes millions of years.

Trever Talbert, maker of "The Scallop", a beautiful example of a Morta pipe pictured on the right, has made Morta a regular part of his work. Examples of Trever's Morta pipes can be seen in Trever's Morta Pipe Gallery. Trever also describes the process of finding, harvesting, curing, and making pipes from Morta in Creating Pipes From Morta.

Davorin is a pipemaker from Croatia who is also using Morta on a regular basis. He explains the material on his website. In addition to black morta, Davorin uses "Copper" and "Golden" Morta.