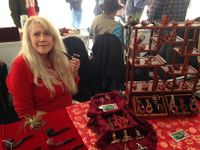 With a name like Silver Gray, you can imagine a unique individual. Silver is one of the very few women pipemakers in the world and fewer of the United States. Her artistry has developed from years as both a fabric artist/seamstress and potter. The design and flow of her pipes is a progression of that experience.

Silver has now chosen to expand her artistry under the master pipemaker, Brad Pohlmann. While sitting in Brad’s shop one day, bored, she decided to try her hand at working with briar. Not wanting to assume she could make a functional pipe, she instead started carving scraps of briar into hearts. She wanted to learn how the briar responded to different applications of carving, sanding, and staining. Excited at the results, she began studying the various styles of pipes and began designing her own pipes.

Silver’s first pipe was a Dublin style pipe which she kept and smokes regularly. She then expanded her pipes into some traditional and some of her own design. She admits that the lathe was one of the hardest pieces of equipment to learn. After watching Brad at the lathe, after asking many questions, after making mistakes, she now drills her own bowls and airways. All of her mouthpieces are hand carved from ebonite and Cumberland.

Silver’s production of pipes is limited to less than 20 pipes per year as she only works on them on nights and weekends. Each pipe is carefully designed, carved on a grinding wheel, drilled, sanded by hand, securitized, re-sanded, stained, and polished.

Working under a master pipemaker has elevated Silver’s learning curve. She admits the quality of her work would not be the same without his careful, patient, tutelage. Brad and Silver’s shop is located just behind their house which makes it easy to slip out to the shop for a few minutes only to notice hours later how much time passed.