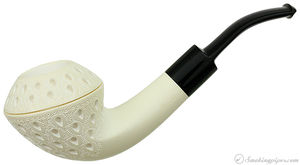 WGM Meershchaum pipes are made by Mustafa Albayrak, who was born in 1963 in Margi Village of Eskisehir Turkey, the source of the finest meerschaum in the world, as well as the home to virtually all meerschaum carving of significance. At the age of 13, Mustafa entered the world of meerschaum carving as an apprentice to master Ali Selver, becoming a journeyman by the age of 20. From 1980 until 2002, Albayrak was a partner and cooperative carver for many different concerns, including many projects with the legendary Ismet Bekler. It was in 2002 that Mustafa became a recognized master within the trade and became a driving force behind the IMP meerschaum, and its commitment to incorporate the same engineering standards into their meers which were demanded from any briar worth its salt.

Twelve years, and thousands of meerschaums later, Mustafa Albayrak now commits his considerable skill and vision to the already celebrated reputation of WGM. WGM is dedicated to creating immaculately engineered, brilliantly sculpted meerschaums of the highest quality. Using push-pull delrin tenons, similar to briar pipes, and only premium-grade meerschaum, these smoking instruments are worthy of inclusion within any collection. Courtesy, smokingpipes.com

Currently the pipes can be purchased through Smokingpipes.com and EACarey.com.

They will soon be available on their own website.