An Analysis of the Artistry of Hiroyuki Tokutomi

This article is courtesy of Smokingpipes.com, and used her by permission. All rights reserved.

Hiroyuki Tokutomi, formerly unknown outside his native Japan and barely known within, has exploded onto the world stage during the past three years. His creations have captured the imagination of astute collectors in the United States and Europe. Though his pipes are often beautifully grained, that is not what has ignited the passion of those that collect and love Tokutomi's pipes. While his engineering is perfect and the smoking qualities superb, that is not what has yielded this excitement. Quite simply, Tokutomi's sense of design and shape is brilliant. Tokutomi is an artist whose medium happens to be briar, whose self-imposed constraints are the limitations imposed by the necessary functioning of a smoking instrument.

Tokutomi-san studied under Sixten Ivarsson in 1976-77. He is one of a few carvers who trained directly with the man who was primarily responsible for the change in mindset that yielded the Danish Revolution in pipe making during the 1960s and 1970s. Along with the likes of Lars Ivarsson, Bo Nordh and Jess Chonowitsch, Hiroyuki Tokutomi thus belongs to the first tier of the Sixten School. All four have gone on to achieve great things. Lars, Bo and Jess are widely considered the three best carvers in the world. Each has formed his own interpretation of Sixten's style. Jess Chonowitsch has developed a fairly conservative design, though Sixten's influence is still visible. Bo Nordh has created some radical variations on Sixten's work, yet the fundamentals of Sixten's vision are still present. Lars Ivarsson, not surprisingly, has a style that is closest to that of his father's, but has also taken the aesthetic in new and interesting directions. Tokutomi, too, has developed a style that is both very much true to his master's and overlaid with a wildly different cultural aesthetic. Fundamentally, Tokutomi has taken the style that was developed by Sixten Ivarsson, the style that has grown to define high grade Danish pipes, and recreated it to reflect his own heritage.

George Nakashima, the famed Japanese-American furniture artist, has come to typify Zen Modernism for many art collectors and art critics. It is his synthesis of Japanese aesthetics and the Western Modernist tradition that so enthused those that understood his work. A professor of art history at a prestigious North Eastern college immediately likened Tokutomi-san's pipes to the furniture of George Nakashima. When Tokutomi heard of this reference, he was much flattered, since he considers Mr. Nakashima to be a considerable inspiration. Not only did Nakashima create art that bridged the East-West aesthetic gap, he also created art that was functional. He made tables, chairs and other furniture. Likewise, Tokutomi-san not only bridges the East-West aesthetic gap by overlaying his own aesthetic sensibilities on an unquestionably Western art form, he does so with a fundamentally utilitarian object. George Nakashima did it with furniture. Hiroyuki Tokutomi does it with pipes.

Tokutomi only has a very rough sense of what will result from a block of briar when he begins to cut it. Many other high grade carvers have a very specific idea of what they intend the block to yield when they start work. They have drawings and engineering sketches made before they ever begin creating sawdust. Tokutomi may have a general notion of what he wants to achieve with a given block of briar, but doesn't feel restricted by such as he begins rough shaping. To a greater degree than most, he permits himself the flexibility to modify designs as inspiration strikes. Though the grain of the briar is important to him, as it is to all pipe makers, Tokutomi-san is more shape-focused and less grain-obsessed than most other high grade pipe carvers. The grain pattern might inspire him as he cuts the block, but he doesn't feel beholden to it.

Of course, it is a grain-centric method that is most commonly associated with the likes of Preben Holm and other 'freehand' style carvers. Though some of the methods employed are similar, Tokutomi could not be further from that aesthetic school. Preben rejected pre-ordained form. He rejected the discipline of shape that Sixten Ivarsson, Poul Rasmussen and others imposed upon their pipes. Tokutomi's pipes clearly display a discipline of shape. They are almost all wildly asymmetrical, yet they are disciplined in their asymmetry. They demonstrate that sense of asymmetrical balance that is so central to Japanese art.

High-grade Danish pipe makers have inherited Western art's predilection towards balanced, symmetrical designs. Slight asymmetry is acceptable, though it is clearly held in check by the symmetrical elements. Contradistinctively, Tokutomi embraces asymmetry, but within well defined parameters. Asymmetry need not lead to design that is visually imbalanced. 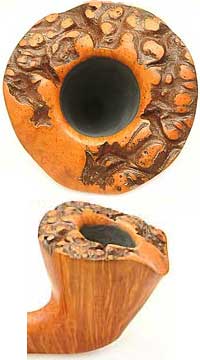 It would also be unfair to say that Tokutomi lies along a scale defined by Sixten at one end and Preben Holm at the other; Tokutomi approaches pipe making with a radically divergent set of aesthetic underpinnings. He hasn't forsaken discipline of shape; indeed, he has embraced it to a far greater degree than many other carvers. But the premises from which that discipline is developed are radically different from those of his Danish or German colleagues.

Just as certain stylistic features are inherent to the pipes made in the Danish Modernist style, there is a large set of very specific stylistic elements that define Tokutomi's work. Aside from the mechanical requirements of pipe making, those things that are the limiting factors in this particular art form, the overriding stylistic elements present in Tokutomi-san's work are markedly divergent from those of his teacher, of the style that Sixten Ivarsson and Poul Rasmussen propagated.

The primary and most obvious divergence between Tokutomi and the Danish or Danish-inspired carvers is his seemingly wanton use of asymmetry. In 2003, Tokutomi made roughly 190 pipes. Of those, about three were bilaterally symmetrical. Of the 150 pipes with rounded bowl shapes (variations on Apples, Billiards, Dublins etc), two possessed radial symmetry. Symmetry is highly valued in Western art, but generally eschewed as a guiding principle in most Japanese art forms. If a Danish or Italian pipe maker were to create a round bowl that did not possess radial symmetry, the immediate assumption would be that the carver was either incompetent or careless. But natural forms are not symmetrical; therefore, the art that reflects those forms is not symmetrical. Tokutomi embraces asymmetry. However, there are rules that are followed. There is discipline and restraint, though by Western standards, the asymmetry is radical. The final shape must have visual balance. The result must be harmonious rather than incongruous.

Perhaps one of the most important differences between the Danes and Tokutomi lies in the linearity of the overall shape. Even with intentionally asymmetrical Danish shapes, such as the Blowfish (originally called the Disk by Sixten and Former, the two carvers most commonly attributed with its creation), the asymmetry is held by the bisecting line of the pipe. A direct line can be drawn from the center of the button to the very front of the bowl. The sides may, or may not be symmetrical, but the rigidity of this center line helps the pipe to keep its visual balance and coherence. On this subject, Sixten was adamant: that line must be perfectly straight. It must be carried from the end of the shank on the bottom to the end of the shank on the top, with no visual interruption. 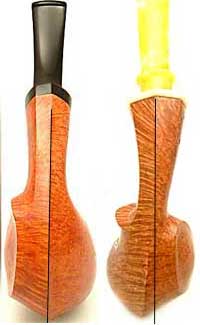 In Tokutomi's words, "This was very important to Sixten. He taught me to maintain that straight line. I do not think it is so important." It's not that Tokutomi has rejected the importance of the line itself. Tokutomi-san has just discarded the idea that the line needs to be perfectly straight. Tokutomi, in keeping with the precepts of his cultural aesthetic, believes that balance can be created without that added rigidity. The results are, of course, spectacular. The Blowfish shape takes on a sense of softness and movement as that line is freed. It's no longer a brilliant work of 'technical design' - the shape comes to life. Though this stylistic difference is evident in almost all of Tokutomi's pipes, nowhere is it more indicative of the style than in his Blowfish. For the Danes, the straight line is sacrosanct, because without it, there is no cohesion of form. For Tokutomi, cohesion of form can be created in other ways. Asymmetry need not lead to incoherence.

Tokutomi-san's goal, with his wildly asymmetrical style, is to create natural, organic forms. Tokutomi's pipes do not appear constructed or designed. Though artistically coherent, they don't seem to have been put together from separate stylistic elements. They strike us as complete, consistent pieces, conceived as individual, non-divisible entities. Tokutomi pipes possess a softness and pliability of shape that few other pipes have. They also have a sense of movement that is very different from that of his Danish colleagues. By eschewing rigid forms, Tokutomi creates pipes that appear to have sprung from nature fully formed. Combining this with a delicacy of design creates a sense of fleeting impermanence. By crafting soft, moving, impermanent objects from a material as hard as briar, Tokutomi explores the juxtaposition of the softness of the design and the hardness of the material. The challenge for Tokutomi is to create an object that is perceived as impermanent, but out of a very permanent material. He strives to create softness from hardness and fluidity from solidity. It is this contradiction that Tokutomi chooses to explore. 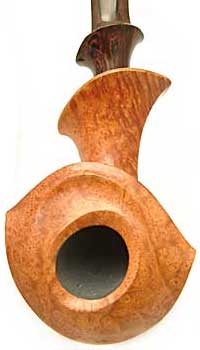 Much of that pliability, softness and movement is created by Tokutomi employing and juxtaposing soft and hard lines in his pipes. Tokutomi might carve a hard edge, but then bend it in an unusual way. By featuring a combination of convex and concave surfaces, complex, undulating surfaces and complicated edges, Tokutomi's pipes have a sophistication that is simultaneously very natural looking and extraordinarily difficult to execute. Forcing various trinomial planes to fit together on the surface of a pipe is extremely difficult. To do so harmoniously is pretty close to impossible. Yet, Tokutomi accomplishes this with every pipe he makes.

One additional salient stylistic element serves to tie the various elements in a given piece back to the piece as a whole and the aesthetic in general. Tokutomi pipes have a sense of wholeness and completeness for many reasons, but none more important than his fascination with feature reflection. Frequently, where possible, Tokutomi will reflect a theme presented on one part of a pipe elsewhere on the same piece. The same undulation that is present on the rim is reflected on the end of the shank, and again on the stem. Of course, these patterns are not replications of each other. They reflect each other through hints of a unifying stylistic idea, rather than directly replicating themselves again and again. The stem is always the hardest part to connect visually with the pipe. The material is different; there are obvious visual breaks from the shank to the stem. Therefore, Tokutomi focuses on visually tying the stem to the rest of the composition, thereby creating a coherent whole.

A Tokutomi pipe collector once asked whether I thought Tokutomi was 'artistically conscious'. Is Tokutomi aware of the sources that created his aesthetic? Is Tokutomi conscious of the artistic elements that he employs? Or is his sense of artistry so suffused with this aesthetic that it is sub-conscious? These are rather complicated metaphysical questions to ask about a pipe maker! The answer, of course, is that he is very much aware. This is a style that he consciously created and continues to develop. Tokutomi-san knows exactly what he wants to say; and, thankfully, he says it with pipes.