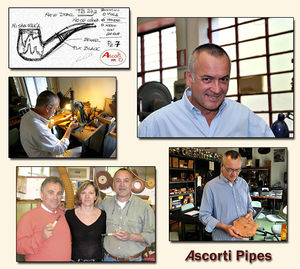 Roberto Ascorti, now 49, son of Giuseppe Ascorti, best known as "Peppino", "met" the pipe when he was 10 years old, back in 1968, when his father started the new adventure as pipemaker. 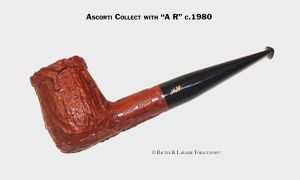 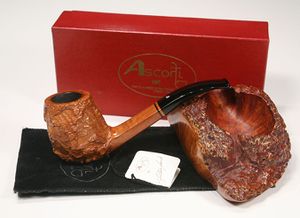 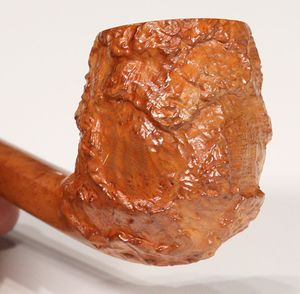 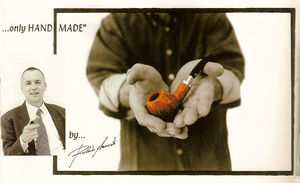 He attended the Art Institute, but he continued with his passion for the pipe and decided to assist his father more and more. In 1980, when he was 22, Roberto decided to devote himself completely to creating pipes, but there was no room in his father's factory; so he started by himself with his own name, ASCORTI, supported and helped by his father, his brother Pierangelo and by his girlfriend, Silvana. Then, when the historic Caminetto factory closed, its artisans entered the newborn Ascorti which had all the tradition, the experience, the power and quality that Peppino Ascorti had built in several years, but with innovations in the model making and in the technical solutions, brought by the young Roberto. 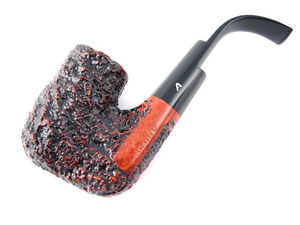 During those years Roberto suffered the early passing of his father and his brother. But with the help of his wife, Silvana, always by his side, he continued with love and experience to compete with a market which is extremely variable and ruled by accelerations(?) of the changes. Roberto is able to change the style of his design by revising old shapes, personally checking the progress and working side by side with his precious artisans. 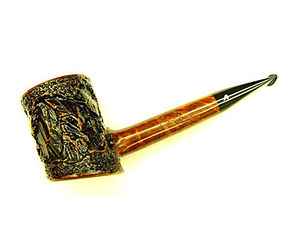 Briar is personally selected by Roberto who controls the quality, dimensions, weight and the first seasoning, which is very important and done in the area where it is collected and cut. After the first scrupulous control, the briar is then aged for two years, to reach the seasoning that he thinks is perfect to create a pipe. Each pipe is designed by Roberto and it is initially crafted with small machines, made by hand by his father Peppino, with the help of his son, back in the 70's. They are perfect to allow different processes as the artisanal tradition requires.

After the drilling of the bowl and shank, the pipe passes through an interminable series of handmade steps done only by Roberto and the irreplaceable Cesare (already aside of Peppino in 1968). 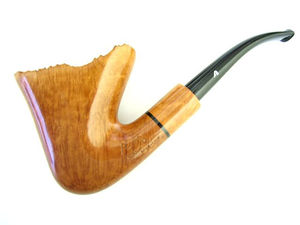 The mouthpiece, made in methacrylate (acrylic) is also completely handmade, obtained in sheets which are cut into bars, then drilled and shaped with files and sandpaper. There are 90 steps to the procedure, small or large, but everyone important, that Roberto requires before he considers his creations finished and ready to be shown to the customer.

I think that the love that Roberto flows into his pipes, absorbed by the workers and relatives, is perfectly understood by smokers all around the world, who never fail to give us satisfaction with praise and public or private lauds.

Our philosophy? The love and the passion in what you do, with the help of who is around you.

Silvana Ascorti, who met her later husband Roberto in 1976, learned the secrets of hand crafting pipes growing into the Caminetto team headed by her father in law "Peppino" Ascorti. In 2008, after 32 years of experience in pipe making and pipe business Silvana has created her own line with Roberto's assistance titled "La Silvana". This very classic line of pipes exalts the Italian design in a Smooth and Rustica series. The most distinct feature of these pipes are mouthpieces featuring an elegant color with a new fashioned logo.

In the USA "La Silvana" is available exclusively through The Tinder Box. The suggested retail prices range between $79.99 and $89.99.

An excellent selection of Ascorti pipes is available at Pipedia Underwriter, lepipe.it