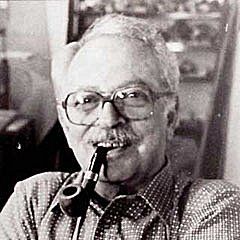 Fritz Becker, was born in Vienna in 1921 into an Austrian / Jewish family. When Hitler's III. Reich annexed Austria in 1938, he fled to southeastern Europe from the threatening racial persecution. Becker succeeded to hide in the Balkan Mountains until he managed to reach Southern Italy after the landing of the Allied Forces there. Highly educated and speaking five languages fluently, he joined the British Intelligence Forces. Following the northbound advance of the Allies in Italy he came to Rome and decided to establish himself there after the war.

Here he continued to work as a linguist and translator. Later Becker was designated Representative to the Vatican from the World Jewish Congress, an estimable position almost equivalent to an ambassadorship. In the course of time his artistic penchant grew stronger and he became an accomplished painter, sculptor and designer. His attic in Campo de' Fiori became his studio in which paintings and sculptures mingled with his first pipe experiments...

An English officer had introduced him to pipe smoking in 1944. However, once he had become a more experienced smoker, he was never really satisfied with any of his pipes. He was constantly busy modifying them, widening bores, altering their structure and overall design. Finally, he decided to try making his own pipe. The small attic studio where he used to paint was the ideal place to begin this new experience.

What began as a complete hobbyistic pleasure in 1970 got more serious when his son Paolo (*1952) joined him more often in the studio from 1974 on. Paolo, who had always been interested in mechanics, began to involve himself in the new project as he loved to handle briar and experiment with new ways of working it. Father Fritz was quite enthusiastic about it. He was happy to discover that his interests became his son's interests, too.

Both worked hard but having great fun developing new shapes and improving balance and functionality of the pipes. Every time they designed a new model, said Paolo, it was a fascinating experience they shared. Doing it just for fun in the beginning, father & son produced only very few pipes at that time. However, as they progressed and grew more confident about what they were doing, the number of pipes began to increase.

Then Fritz Becker had a splendid idea: He approached Carmignani, one of Rome's oldesr and finest pipe shops, with a selection of his pipes and asked the owner to give them away as gifts to knowledgeable clients to get feedback from expert smokers vice versa. These pipes had no stampings or logo. The results were immediately very gratifying. But Becker was aware, that pipe smokers and collectors might rarely ever judge a pipe received as a gift in the same way as a longly looked for and highly paid for.

Taking the next step, the Beckers asked Carmignani in 1975 to sell a series of pipes made by them that were stamped "Carmignani- Hand Made". By the end of 1978, the pipes had earned the respect and esteem of Carmignani clients and had gained a good portion of the market. So, in 1979, the Becker brand was born and the "Carmignani" masquerade was abandoned. 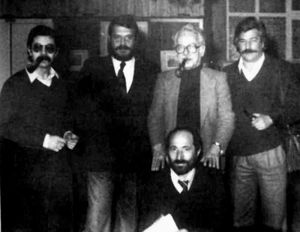 Becker pipes started to gain reputation and popularity when Fritz and Paolo Becker's work was discovered by Giorgio Musico, who was sales manager and co-owner of Carmignani now. Musico, tutoring many Italian pipemaker talents before, soon realized that the father and son team was producing something truly special and began selling Becker pipes. Thus, the great partnership of Fritz & Paolo Becker and Giorgio Musico began, a partnership that finally generated the Becker and Musico pipes and the Becker & Musico shop in 1989.

Becker pipes left the attic and migrated to a new workshop with considerable more space, and Paolo committed himself full time to pipemaking. Increasing production made it possible to expand sales to other well reputated pipe retail shops in Italy. Becker pipes also expanded on international markets - the United States, which had always been an important outlet for Italian handicrafts, becoming the most important one.

Starting in the mid 70's, American pipe retailers had been coming to Italy looking for pipes to market in the States. One of them, David Field, arrived at the Becker workshop in 1981 and offered to become the importer of Becker Pipes. Field's efforts made the pipes an immediate and lasting success in America. Sales to Switzerland, Austria or Germany suffered from neglected large scale distribution policies. (Not only, as claimed, because care and respect for quality has always come before quantity, but in favor of the higher prices in the States!)

Proceeding in age Fritz Becker kept himself more in the background during the 1980's but kept working on his pipes and standing behind Paolo with advice and help.

Well, Fritz Becker surely preferred the classic "English" shapes in particular, while Paolo dedicated himself more to the neo-classic styles. Eventhough, all aspects of pipemaking were completed by both carvers involving the special skills of father and son. So it is practcally impossible to say "this is a Fritz" or "this is a Paolo" about the pipes from the 1970's to the 1980's.

In 1979 Fritz Becker classified the pipe grades by using the universally known code of playing card symbols. This nomenclature, except for the more recent introduction of grades "A" "B" and "C", has remained unaltered and the stamps are still the original ones that have been used since 1979. For more detailed information see Paolo's website and continue to "Grades" and "Marks".