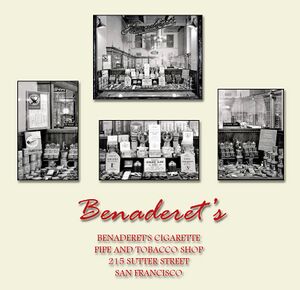 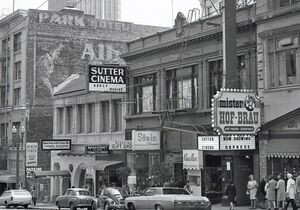 "Benaderet's Cigarette, Pipe and Tobacco Shop" was located at 566 California Street in San Francisco, California. Looks like their final address was 215 Sutter St., San Francisco, CA as seen in street photos and on matchbook covers.

"Benaderet's Inc., was California's oldest pipe and tobacco store when it went out of business in 1980. Sam Benaderet was a tobacconist from New York City who came to San Francisco in 1915 to work at the Panama Pacific International Exposition. An immigrant to the United States from Turkey, Mr. Benaderet decided that he liked the West Coast's Mediterranean like climate. After the Exposition closed, he stayed to open his own tobacco business. This new firm produced custom private-label cigarettes for men's clubs. A lavish retail store was opened in the late 1920's that quickly became a mecca for tobacco connoisseurs."

Benaderet's pipes were apparently made by Comoy's as seen in the example bellow, beautifully restored and documented by Steve Laug at Reborn pipes. There are also reports of Sasieni and GBD made examples.