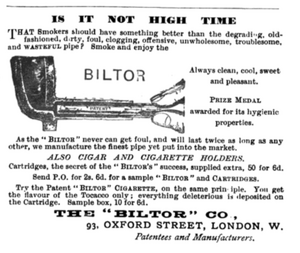 Biltor was an English pipe manufacturing brand, founded circa 1889 and which traded until 1934 [1]. It was notable for making pipes with an early, patented filter system.

Biltor was the brainchild of a Swiss, Emil Alexander Wüterich, a 'Medical Agent' who, in 1891, was living in England at 24 South Molton Street, London [2]. On 22 February 1889, Wüterich was granted a British patent (number 3199) for "A device or appliance for tobacco pipes or cigar or cigarette holders to prevent nicotine reaching the mouth of the smoker" [3]. On 19 November 1889, Wüterich obtained a US patent (number 415,690) for the same invention. [4]. The patented filter system was based on a tube made of "some suitable absorbent, permeable, or porous material - such, for example, as blotting-paper, felt, or a textile fabric - and closed at one end and and open at the other." The filter could also be treated with medicinal or aromatic liquids: "If desired, the absorbent permeable material employed can be medicated or chemically treated with tannic acid or other substance, or perfumed."

Wüterich was marketing pipes under the 'Biltor' brand from premises at 14 Holborn, London, no later than 1893. In that year, Merck's Market Report and Pharmaceutical Journal carried a short article on 'The "Biltor" Pipe' [5], describing it as follows:

This is a hygienic pipe for tobacco-smoking. The hollow of the stem is of such diameter that a tube of paper felt closed at one end can be readily inserted in it. This tube acts as a filter for the smoke, and as it becomes moistened by the water vapor it keeps back all the oleaginous and alkaloidal products of decomposition... It is quite permeable to smoke. The idea of filtering tobacco smoke, and the use of paper as a filter are not original, but in the present simple form the idea is better carried out than we have hitherto seen it, and, what is of equal importancet to retailers and smokers, the pipe is cheap. It is put on the market by the "Biltor" company, 14 Holborn, London E.C. 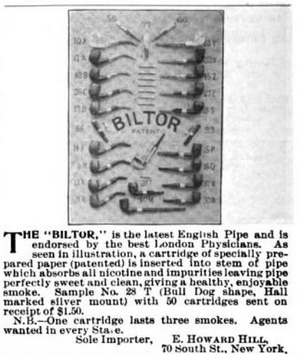 In 1893, The Biltor Co seems to have moved from its premises in Holborn to 93 Oxford Street, while its adverts claimed the Biltor pipe had been awarded a 'Silver Medal' for its 'hygienic properties'[6]. No later than 1896, Biltor had opened another branch at 88 Queen Street, Cheapside [7]. However, Biltor was not registered as a limited company until 1897, after which Wüterich assigned his patent to the company for a consideration of £5,000 and 15,000 £1 shares [3]. The company also issued debentures for secure loans made by Marian Charlotte Vibart and Anna Wüterich. It is not known whether Anna Wüterich was Emil's wife or daughter. Marian Charlotte Vibart, however, was a member of the Hermetic Order of the Golden Dawn from 1898 [8]. This was an occult secret society whose members were to include luminaries such as Bram Stoker, Arthur-Conan Doyle and Aleister Crowley. Another member of the group, John Valentine Lacy, was initiated into the Order on the same day as Vibart. In the 1901 census, Lacy is described as "Secretary to Biltor Ltd" [9].

Wüterich worked hard to promote his patented pipes. In 1893, Biltor won a medal at the World's Columbian Exposition in Chicago. In 1900 Biltor was present at the Exposition Universelle in Paris [10]. Nor was Wüterich averse to promoting his pipes at smaller events. In April 1893, Biltor could be found at Stand 3 at The Chemists', Druggists' and Allied Trades Exhibition [11] at the Royal Agricultural Hall. Advertisements in the British, US and Australian press, as well as in popular books, were common.

Loss of the Biltor Patent

Biltor Limited was delivered a major blow in February 1903. In that month, Wüterich and his financial backer Marian Vibart applied for an extension of the 1889 patent. According to the accounts submitted to the Judicial Committee, the business had made an overall loss. However, the accounts did not detail what profit or loss had been made on the sale of the patented items - it was impossible to extract the figures from sales of other items, such tobacco. As a result, the Privy Council refused to renew the patent.

With the loss of its patent, the Biltor brand appears to have become less prominent. It is likely that Wüterich was struggling to make the company a success. At the time of the 1900 census, Wüterich was renting an unfurnished room at 123 Beaufort Street for 7s 6d rent per week: not the accommodation of a successful man.

References to the company appeared in the press as late as 1909 [12]. One of the last references to Wüterich is in a patent application of 1919 [13]. This was for "The invention of a switchback track provided with a surface of polished wood, cement, &c., adapted to accommodate a number of users side by side". However, neither this nor his earlier invention of a chess-based parlour game (patented in 1889), seem to have made his fortune. Wüterich died in November 1927 without leaving a will. Biltor Limited was wound up in 1934.

These photographs are of a Biltor pipe, including a close up of Wüterich's mark 'EW' and a hallmark on its silver band. 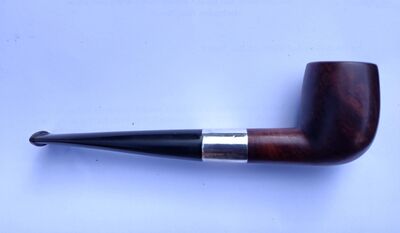 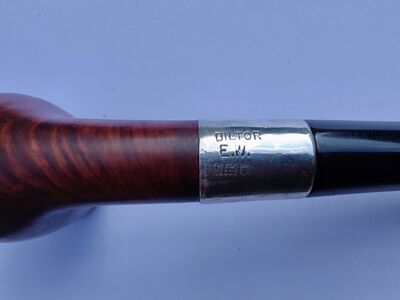