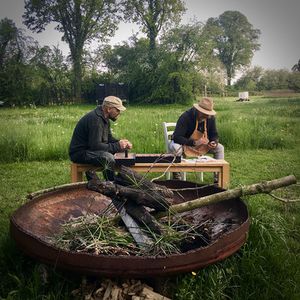 What unites them? In addition to their full-time work, they are passionate pipe builders and - accordingly - pipe smokers. They have turned their shared passion for beautiful, high-quality pipes into a part-time job, and marketed the resulting pipes since 2015. Pohler and Klemme build and present their pipes as a team, with each of them doing everything, both alternately and together. Their workshop is in Hamm Westphalia. Their aim is to create co-pipes in the manor of what can be found in Denmark.

In addition to team pipe making, Kelvin and Toto also agreed on two tobacco creations by HU tabacco - "The Bullet" and "The Swan". "We both love one mix as the other, whereby "The Bullet" is a pure taste -Explosion proves, on the other hand, "The Swan" - Latakia lovers especially recommended - "picked up" again and again!"