"Joe doesn't carve anymore, and it's quite a shame. Known for his "Medieval Jawbreaker" shape and his outrageous volcanoes (see below!!!). Well, being from the Big Island of Hawaii, which is home to Kilauea Volcano, it is easy to see where he gets his inspiration. This pipe is a true volcano in every sense of the word. The attention to detail and the accompanying grain on this pipe is awesome. If you've got the mustard to smoke this volcano, be aware of its immense size, nearly 9" long and 160g in weight. Shank extension looks like cocobolo, but not sure. A definite centerpiece." 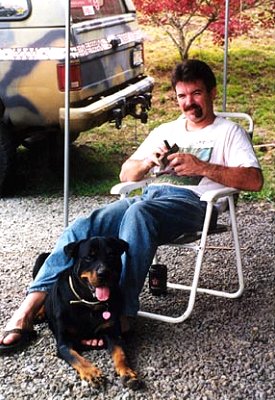 Joseph M. Crable lives in Kealakekua, Hawaii 96750 and his main occupation is being a firefighter.

Back in 1998 or 1999 he carved his first pipe on a trial basis. The result wasn't too overwhelming. As he couldn't find a tutor in the midst of the Pacific, he ordered a copy of "Pimo's Guide to Pipe-Crafting at Home" to teach himself. This booklet must have been very helpful, because Joe released his first pipe for sale in 2000.

Joe Crable's pipes quickly found an increasing number of friends delighted with his work. Trever Talbert did the sandblasting on some them, which is surely a good recommendation. He started the Kealakekua Pipe Shoppe, where he also sold some coffee living in the heart of the famous Kona coffee area.

All of a sudden it was over. In February of 2006 Joe said "Aloha" on the ASP forum "after a long absence. Still lurking in the shadows over here on my volcano island. Have I made any pipes lately? No. However I am thinking about it, and how I might go about it differently this time. Why did I stop? Carving became too close to a job and I couldn't create, not a bit. So I've been thinking about shining up my rusted carving tools and making a few pipes starting with a "Volcano", just for the enjoyment of it. Whenever and whatever I feel like doing; like I started to."

Any newer news about him?

Here you can find a little Gallery of Joe's pipes. Enjoy!