Elliott Nachwalter studied the History of Art and Photography, but passionate about pipes, decided to go into pipe making. With a few tools and some machinery, he started his workshop some 25 years ago (that would be 35 years ago now, as of 2015), in Stowe, Vermont, where he shared a warehouse with Andrew Marks. He later created Briar Workshop with Jorg Jemelka, and was joined by the Danish designer Finn Meyan Andersen. They also collaborated with various artisans, such as Brad Pohlmann, J.T. Cooke, and Carol Burns. 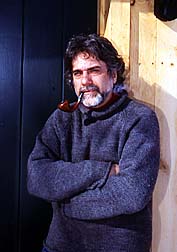 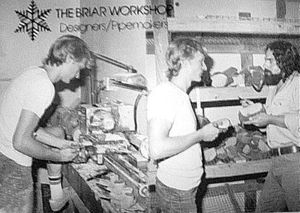 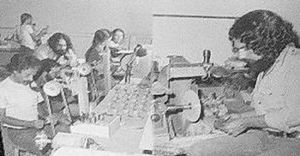 Elliott at the shaping wheel

Between 1980 and 1983, Elliot had a shop in New York where he would make and sell his pipes There then followed an interregnum -- "For three years I was away from my craft, not knowing if I would ever make pipes again" --, after which he returned to Vermont and built Pipestudio. Aim: "to creat sensual pipes, beautifully grained that are pleasing to the eye" and which would be "the creation of sculpted smoking instruments that are functional pieces of art".

He uses Briar from Italy and Greece; and vulcanite, acrylic, or cumberland stems. Symbol: a kind of six-pointed star.

Some twenty five years ago, I began the journey to my studio which is now located on the Battenkill in southern Vermont. I started making pipes, in a small wooden shed overlooking the village of Stowe. My tools were few; a bow saw, a hand drill, a sculptor's grinder and a sanding wheel. I had a consuming desire to create pipes that excited me. I worked late into the night.

Andrew Marks and I shared a store in Stowe for a short while and eventually I started the Briar Workshop together with Jorg Jemelka. We were joined by Danish designer pipemaker Finn Meyan Andersen. Through the years we had several talented crafts people working with us including Brad Pohlmann, Jim Cooke, and Carole Burns. We made many wonderful pipes that were sold by fine tobacconists around the country.

In 1980 I opened a store in New York City and designed and made pipes in the back of the store for pipe smokers that visited me from around the world. I worked late into the night. There came a time when I felt the need to stop making pipes. For three years I was away from my craft, not knowing if I would ever make pipes again. Something was missing. Perhaps I was missing the struggle of the creative process and the pure joy that one feels when you make something turn out exactly as imagined in your mind's eye. I suppose I needed to make pipes; I needed to work late into the night.

In the autumn of '96 as the falling leaves mixed with the early snowfall, I built a small studio overlooking the Battenkill and surrounded by the Taconic and Green mountains.

It is my desire to create sensual pipes, beautifully grained that are pleasing to the eye. I work with only the rarest of briar burls that are seasoned in a manner that allows for a minimal break in period and a very smooth smoking pipe. The briar grows in the wild and there is a remarkable difference in grain between each block . This variance of grain together with the myriad of designs in my mind and the nature of the work, makes for truly one of a kind pipes. The essence of my work is in the creation of sculpted smoking instruments that are functional pieces of art.

It is here in Vermont, once again, that I find the inspiration for my work. It is here that I work late into the night.