It is good to be a pipemaker...
pipemaking is not only a job, it is a lifestyle...

Tom Eltang took an early interest in pipes and pipe making. From the moment he stared through a tobacco shop display window at age 6, at seeing a magazine that featured very nice pipes with yellow and black staining, he knew he wanted to make something like that with his own hands--he wanted to make pipes. 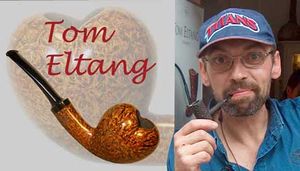 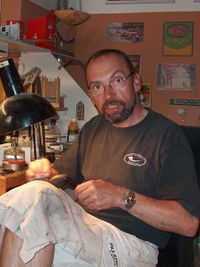 Eltang made his first pipe from a Pipe Dan kit at the age of 11. Later, he learned about pipe making from a man named Flemming, who worked at at a center that helped youth transition into working adults. Tom made some pipes there in the afternoons and evenings. He was next given a two-week tryout at the Larsen pipe factory, but discovered that was not the right place for him. He was not interested in the factory approach used there at the time, with it's focus on efficiency. 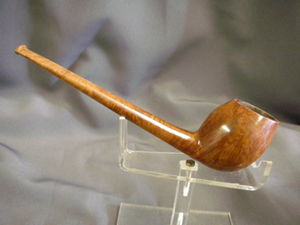 Pipe made by Tom for his interview with Anne-1Julie fresh out of High School, courtesy J. Rex Poggenpohl, who recently returned it to Tom from his collection

He was introduced to Anne-Julie at the age of 16 (August of 1974), and after showing her some of the pipes he had made, he received an apprenticeship. Julie taught Eltang harmony and balance in pipe shaping, as well as the predecessor tothe contrast staining technique for which he has become famous. He worked with Anne-Julie for three years, and than went to work for Pipe Dan where he did repairs and was also able to make some of his own pipes. Like many, Tom found the repair work was great experience in terms of how a pipe works or doesn't work. After three years with Pipe Dan, Eltang took a job working for Stanwell, where he regularly traveled through Germany demonstrating Pipemaking at tobacco shops. He worked for Stanwell till around 1980 when he went into business for himself, but he still sells some of his designs to Stanwell, even now.

During the slow pipe years of the 80's and 90's, Eltang had other jobs to support his family, including installing custom cabinetry for a Danish firm at Danish Embassies around the world. He returned to Pipemaking full time again in the late 1990's starting with long time local woodworking friend Kurt Hansen for a few years. When Elang created the Sara Eltang line of pipes, named after his youngest daughter, Kurt helped with the pipe cutting machine. Recently, he has become a partner in a well established Copengaen pipe shop, and has developed his own brand of pipe tobacco. 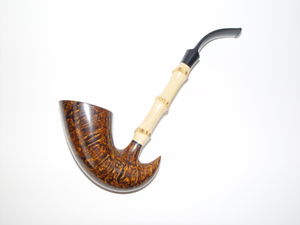 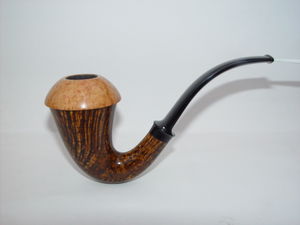 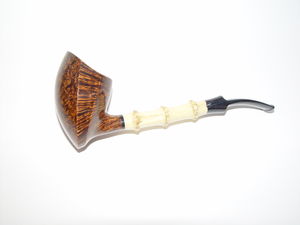 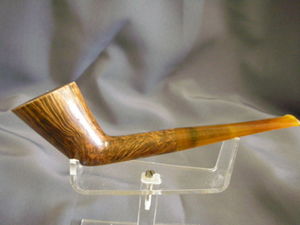 A pipe made for his father, courtesy J. Rex Poggenpohl, who recently returned it to Tom from his collection 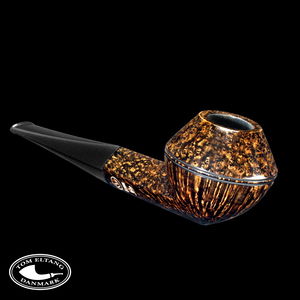 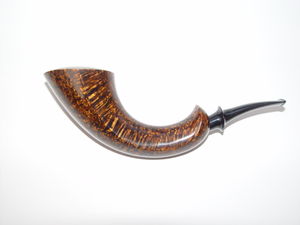 Tom has the respect of nearly every pipe maker. His name often comes up in conversation with young pipe makers as a pivotal influence, and he has generously given his time to many up and coming pipe makers from around the World, many of whom made pilgrimages to his shop previos in Taarbaek or his newer one in "Charlottenlund".

Part of the Pipes & Tobacco article

All were there! That is what you usually read in gossip papers when a first performance of a new play or some gala dinner has taken place and all celebrities have been there. In our world of pipes, this statement was absolutely true when Tom Eltang opened his new workshop in Copenhagen.

We have earlier mentioned that Tom has been very busy fitting up a new workshop and last summer it was ready. On the 15th of August the official opening took place. When I arrived in the late afternoon I was welcomed by the most delicious scents. This time it was not the aroma of delicious tobacco that attracted me, but that of a barbecue. I had earlier in the day been visiting some other places in Denmark and was very hungry, always the best spice of all. In the yard outside the shop there was a barbecue where you could get almost anything you wanted to eat or drink. As I understood it, I was not the only one who enjoyed both the food and the drinks.

A lot of people had met in Charlottenlund this day, in fact there was so crowding that it was quite difficult to move around in the shop. It was not easy to get a full picture of it all, but I am really convinced about one thing – this is a spacious and very well functioning workshop (what else could be expected when a creative person like Tom has made it all), but it is also a very pleasant and comfortable place, not only for Tom but also for visitors. 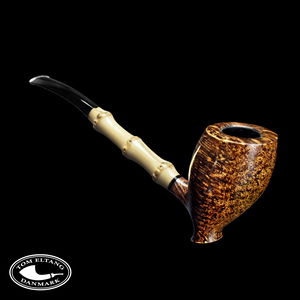 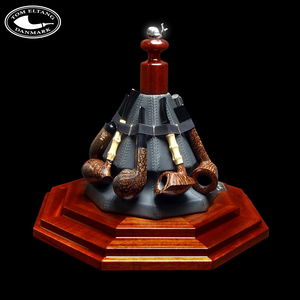 A great attraction was the new 7-days-set which was now shown for the first time. This is the second set Tom has made this year; I can not figure how he finds the time. The set was on a rotating plate so that you could see all the pipes. The cover of this issue gives you an idea of how beautiful it is.

As I mentioned in the beginning all were there. I have never before seen so many pipemakers and other people in the business in the same place at the same time. This proves that there is a friendship among Danish pipemakers; they look upon each others rather as friends than as competitors. That is also my experience from many meetings with various pipemakers.

I was only there for a few hours in the afternoon, but as I later have heard the party went on till late in the evening. We must congratulate Tom to this very successful opening and, most of all, to his new workshop.

Here is a link to a scan of an Eltang catalog from the year 2000: File:Eltang2000.pdf, courtesy, DanishPipemakers.com