There was a time where if you saw an Englishman smoking a pipe you could bet it was a Falcon. Today Falcons are still popular with beginners to pipe smoking and the experienced alike. 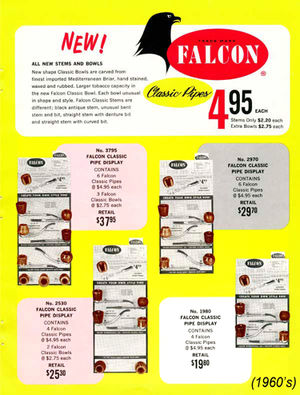 The Falcon pipe was created in 1936 by the American engineer Kenly Bugg. However during WWII the production of the Falcon was limited. In 1949 George Hunt took over production and marketing and by 1954 6 million Falcon pipes had been sold in the U.S.A. By 1961 production started in England. In 1964 the Alco was launched. In 1967 the Brentford was launched but in 1979 it was withdrawn from the market. In 1968 production of the Falcon in Chicago, U.S.A. stopped. The Falcon International was introduced in 1977, which featured a removable mouth piece and filter.

The Falcon pipe features a metal stem onto which removable briar bowls are screwed. The Falcon gives a very cool and dry smoke due to its metal construction. When smoked the smoke is drawn through a hole in the bottom of the bowl into the metal humidome below where moisture collects, drying the smoke. The smoke is then cooled as it passes through the metal stem. Because the bowls are removable they can be unscrewed during smoking to shake out any moisture in the humidome and then screwed back on to continue smoking.

The Falcon, being mostly metal is also easy to clean. The bowl is removed and cleaned like any other briar pipe; the humidome can just be swabbed out with an alcohol soaked cloth and the stem can be cleaned with a pipe cleaner like any other pipe.