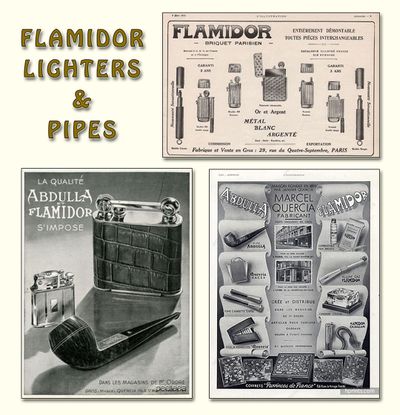 Flamidor is a French lighter company that apparently either made pipes, or had pipes made for them under their name.

Information From benzinaky.com: The company was founded in France by an Italian emigrant, Janvier Quercia, a direct descendant of Michelangelo teacher Jacopo della Quercia. From 1890 Janvier Quercia engaged in a successful trade of religious articles made of precious metals in France.

When Carl Auer von Welsbach invented flint, Quercia patented several lighters of silver on the principle of "eternal matches". In 1908 he constructed his first lighter sparking wheel, which he named Flamidor. In 1911 he introduced the Briquet Parisien model, a lighter with a hinged lid (30 years before Zippo). Briquet Parisien lighters were made of beautifully processed silver or gold during the war and also nickel and other less expensive metals. It is one of the best lighters ever made, using a simple system, yet with the possibility to control it with one hand. Beautiful design, fine materials and perfect finish.