The following is courtesy of PipesMagazine.com

Another S.F. Landmark Under Fire

San Francisco’s Historic Grant’s Pipe Shop has been served with a 30-Day Notice to Terminate Tenancy after 49 years at its current location and 163 years in business. 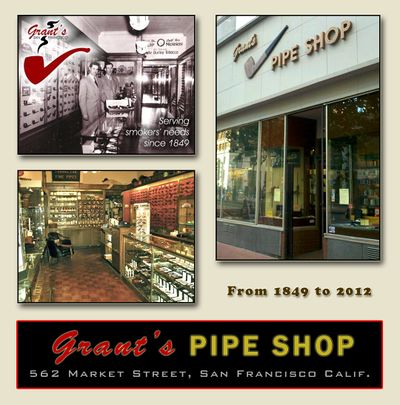 oldest operating traditional tobacco shop, and its historic walk-in humidor was the first in the State of California. Premium Tobacco enthusiasts from around the world have been stopping by Grant’s Pipe Shop’s current Market Street location since 1963, but the shop’s history begins with the Gold Rush of 1849. Originally supplying miners and merchant seamen with premium tobaccos and fine pipes. One of Grant’s most famous customers in the 1800s was local eccentric, “Emperor Norton.” Grant’s Pipe Shop is one of San Francisco’s oldest small businesses.

Store managers of the previous shop owner, Edward L. Grant, had an opportunity to continue this San Francisco legacy when they successfully took ownership in 2004 after Mr. Grant’s passing in 2003. In 2006, the lease expired, and the shop has been on a month-to-month lease ever since, despite numerous attempts to negotiate for a longer-term lease.

Recently, the owners of the Chancery Building applied for a permit through the San Francisco Building Department to construct build outs that will affect Grant’s current space, including its historic walk-in humidor. When one of the General Partners of Grant’s, Joe A. Barron, inquired about details, such as the length and timing of multiple planned construction phases and other normal concerns of tenants when negotiating these matters, the owners of the Chancery Building in return served Grant’s with a 30-Day Notice to Terminate Tenancy, bringing about what could be the end of this San Francisco institution.

Grant’s Pipe Shop is the latest in a series of San Francisco landmarks to come under fire by local landlords eager to raise rents. Prior to serving the conviction notice, the Chancery Building initially suggested doubling the rent in 2009, which would have effectively put Grant’s out of business. Additionally, the Chancery Building’s management has seemed more interested in probing Grant’s current owners into selling the business or misleading Grant’s proprietors over the last three years, leading to speculation that the building’s management or landlords have never intended to offer the current owners of Grant’s Pipe Shop a long-term lease to stabilize this historic shop.

Grant’s owners remain dedicated to maintaining the legacy and tradition of quality expected of San Francisco’s oldest and most well known tobacconist. Quality inventory of tobacco products will be on clearance starting September 18, 2012.