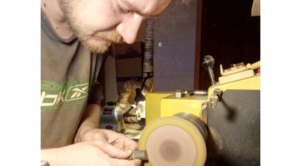 Andrey Grigoriev was born in Saint-Petersburg in 1982. He started making pipes in 2004 as a hobby, while he was working as a professional engineer.

In 2006 he met Viktor Yashtylov, russian hi-grade pipe carver and became his pupil. In 2010 he continued his education in Viktor's workshop as an apprentice, working with him hand by hand, learning the secrets of pipecarving, adopting his methods and training the style. With the help of the great master he became a professional pipe maker and under Viktor's supervision he started to carve his own quality pipes. Andrey Grigoriev lives in Saint-Petersburg, Russia.

An excellent selection of Grigorlev pipes is available at Pipedia Underwriter, lepipe.it