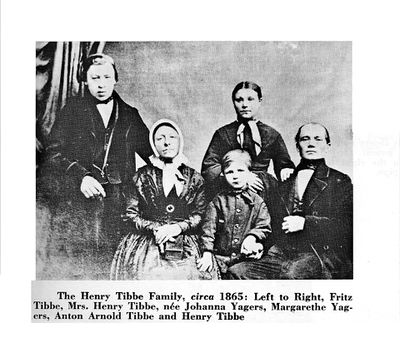 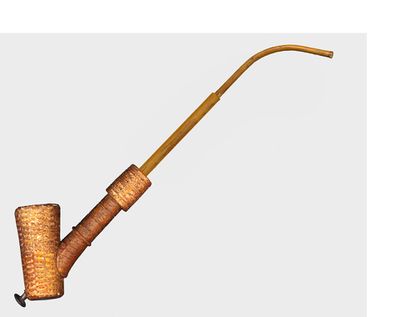 The corn cob pipe industry in America began with Henry Tibbe, a Dutch wood turner, who emigrated to America in the 1860’s. After fire had destroyed his home and factory in Enschede, Holland, he, together with his wife, Johanna, his brother, Fritz, and his young son, Anton, moved to this country, first settling in South Point Missouri. Shortly thereafter, Tibbe and his family moved to Washington, Missouri, a small community in Franklin County on the Missouri River, approximately fifty miles west of St. Louis. There in the late 1860’s he set up a small woodworking business on Second Street in what later become known as the Eisele Printing Building. Tibbe made spinning wheels wooden handles, furniture and other products of his trade. According to tradition, some time in the late 1860s , Henry Tibbe, responding to the request of a local farmer, bored out the pith of a corn cob, cut it in two, smoothed it on his foot-powerd lathe, inserted a reed for a stem and created an improved version of the traditional knife-whittled corn cob pipe. Soon local demand developed for his product and Tibbe began manufacturing corn cob pipes, all the while experimenting with various fillers to further improve his product. In the early 1870s, Henry Tibbe and his son, Aton, established a pipe manufacturing company. The most significant contribution “H. Tibbe & Son” made to the tobacco pipe industry was the idea for fire-proofing the traditional corn cob pipe which tended to burn out easily.

Tibbe’s 1878 patent describes his process for fire-proofing by filling the interstices of the cob from the outside with a plaster-of-paris type substance. This procedure not only fire-proofed the cob but also hardened it, allowing it to be worked on a lathe. Tibbe’s simple idea radically changed the corn cob pipe from a rural make-do object into a popular commercial product. Tibbe needed larger quarters and moved his factory to a building on Front and Jefferson streets and installed a steam engine to help manufacture the pipes. In the late 1870s, Tibbe formed “H. Tibbe, Son & Co.,” an organization consisting of Henry and Anton Tibbe and George H. Kahmann. Due to regular advertising in the larger newspapers and small trade journals and through Anton’s convincing salesmanship throughout the larger cities of the country, the industry flourished. In the early 1880s, Tibbe built another factory on the corner of Front and Cedar streets. The same building, though greatly expanded, still houses the company today.

In January 1883, Henry and Anton received a U.S. patent for a trademark for their pipe, calling it the “Missouri Meerschaum,” the name selected by Fritz Tibbe, Henry’s brother. In 1887, the organization was incorporated with stockholders George and Guy Kahmann and Upton L. Weirick. In 1895, Henry Tibbe’s patent on the corn cob pipe expired. The following year, Henry Tibbe died.