Heritage Pipes Inc. is a subsidiary of S.M. Frank, which decided to go back to producing higher quality pipes for its Kaywoodie brand, and closed Heritage Pipes Inc. at the end of 1971. Kaywoodie still makes a model with this name. Symbol: three small spots (red, white, and blue). 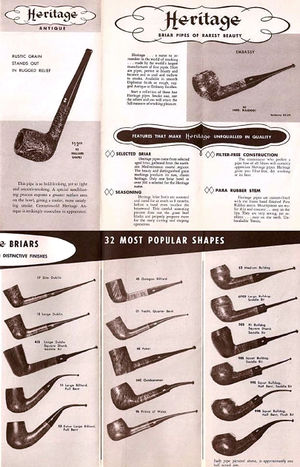 Heritage HEIRLOOM Pipe - These pipes were Kaywoodie's high end line and were made in the 1960's and ended production in 1970. The Heritage Heirloom line was run by Stephen Ogdon who came from Dunhill. Only about 1 in 300 pieces of briar was good enough to use in the Heritage Heirloom line, and only top of the line Para rubber was used for the stems.