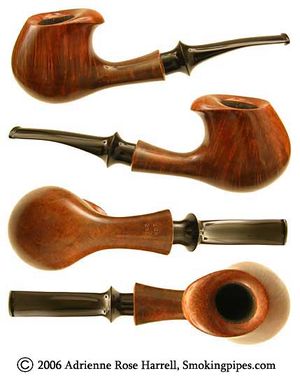 Ichi Kitahara has been making pipes for just a short time, but his work is very impressive. His organic, pliable aesthetic is reminiscent of, though fundimentally different from, that of his teacher, Hiroyuki Tokutomi.

Ichi is trained in various art forms, from his classical training in Baroque style fresco to his months learning Native American silver work in South Dakota. During most of the 1990s, he made custom order jewelry and other objets d'art and sold through galleries in Tokyo. But, it wasn't until he began making pipes in 2004 that he discovered his true love - pipe making. So, while he has only made pipes for a couple of years, he has a long, storied history as an artist.

Today, Ichi makes pipes part time and works as a senior sushi chef at a large sushi restaurant chain in Japan, where he manages a large team of sushi chefs at the chain's various restaurants.