Carsten Idskov is one of the few Danish pipemakers who is better known in his own country than abroad. That is because he has taken part in very few international shows, but, on the other hand, he is a faithful visitor to pipe activities in his own country. One of them is the Danish Championship, where every year he puts on a much appreciated exhibition. And he does not depend on pipe-making for a living, so he can do as he pleases. To Carsten, pipe-making is a hobby and he likes to keep it that way. 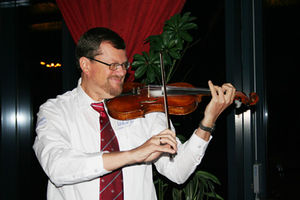 Carsten Idskov ws born in 1958 in a little village in Jutland. He now lives in the city of Aarhus, and his daily work is teaching mathematics and woodwork at a school there. In the middle of the 1990s an American visitor to the city inspired him to start smoking a pipe. Carsetn--at that time an occasional cigar smoker--met this American at a cafe and though that the tobacco he was smoking smelled just wonderful. So he had to try some for himself. He liked it and the next step was settled--to join the Pipe Club of Aarhus.

The suggestion to make pipes occurred when he ordered a pipe from Jens Tao Nielsen. When Tao sent the pipe to Carsten, he enclosed a pre-drilled block with a request--make a pipe from it! Carsten did so, the result was staifactory and his interest was aroused. So he bought some more blocks from Poul Ilsted in Svenborg, who also gave him much valuable advice. 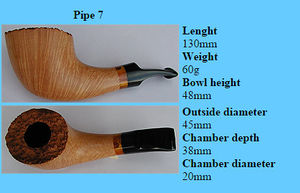 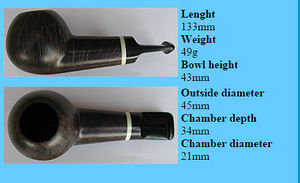 Today Carsten makes abnout 150 pipes a year. The briar is mainly bought from Kent Rasmussen and, like him, Carsten takes pipes needed to be sandblasted to a workshop in Aarhus that specializes in sandblasting. The stems are made from ebonite, cumberland, or synthetic amber and the pipes are stamped Idskov DK along with the year of manufacture. No grading system is used.

The tooth from the sperm whale is a favorite of Carsten's and is used often used as an adornment on his pipes, but he also uses a lot of silver rings. Carsten not only makes pipes, he is also an active collector with pipes made by many of the best pipemakers. He also takes an active part in the Pipe Blub of Aarhus.