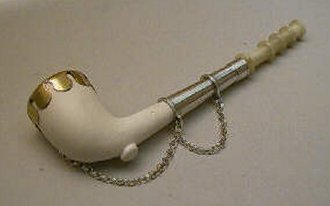 The Muotathaler "Yps" pipe of the Muota valley in central Switzerland is derived from the traditional "Schwyzer" type. "Yps" is "Gips" (gypsum) in the Muotathal dialect, the classic material for the bowls.

The traditional pipes had been produced by Paul Betschart, nicknamed "s' Wiselis Pauli", until 1996. Shortly before his death Betschart asked Andreas Heinzer, if he would like to continue to make these pipes. But Heinzer, not knowing of Betschart's serious illness, blackballed the suggestion seeing no future in it.

Andreas Heinzer began an apprenticement as a toolmaker in 1977 at Victorinox in Ibach, the producer of the world-famous Swiss pocket knifes and multi-tools. Changing his professional career in 1997, he soon missed sorely some workmanlike activity. Feeling sad that no one made the Yps pipes anymore now, he decided to re-install the production.

With considerable help of his brother Paul and his sister-in-law Silvia, a gold smith, he established a family based pipe production. Beside the Yps pipes he offers a range of other traditional Swiss models made of Palisander, Mehlbeerbaum (a whitethorn species), Yew tree and antler. Many of these pipes are metal coated.