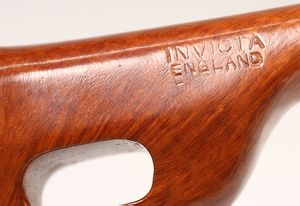 Shortly after the second World War (1947) a company was formed at the old garrison and shipyard town of Chatham docks repairing briar pipes, due to the lack of raw materials to make new ones. This was established at the Old Town poor school, known as the Ragged School ( a pre-runner to Barnadoes of today ) in King Street, Chatham.

The company grew to become the foremost briar pipe repairer in the United Kingdom and continued as Medway Pipe Repair until 1974 when ownership changed to Colin Leeson along with the company name to Invicta Briars.

It was at this point that Mr Leeson took the decision to introduce briar pipe manufacturing into the company and run it alongside the successful repair business.

The range enlarged as did the outlets for purchasing an Invicta briar pipe, encompassing sales across the UK and USA via retail outlets, traditional British county fairs and exhibitions.

After 35 years in charge Colin passed the reins over to Peter to continue the tradition of making fine English Briar pipes. Peter Ellam continued to be the sole craftsman of Invicta Pipes as Colin looked on as an eagle eyed adviser who liked to look over his shoulder at every opportunity just to make sure that Invicta Briars retained its reputation as one of England's premier briar pipe makers.

Colin Leeson sadly passed away at the beginning of February 2013