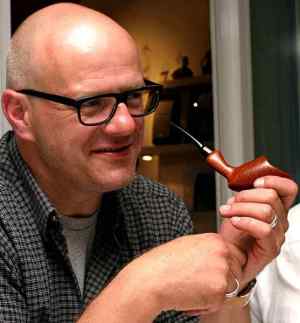 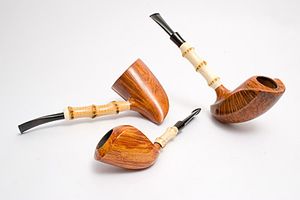 Jürgen Moritz is really a pipe enthusiast. He has already fallen in love with the beauties of Briar as a "young guy" . For that reason, years ago, he accepted a part-time job, during his studies of Social Sciences, at a well known pipe shop. During that time, he had the opportunity to look at so many beautiful masterpieces, and over the years he has also built up a stately pipe collection.

From this long enduring experience, one can be certain that he knows how a pipe shoud be made or, even better, how a pipe should not be made. Of course, many pipe enthusiasts would like to try making a creation of their own. Jürgen has realized this idea in due silence and, in summer of 2004, showed a few acquaintances his pipes, an understandable restraint which he, however, wouldn't have needed. Although he did not have a lathe at that time, his pipes were always very clean and meticulous. 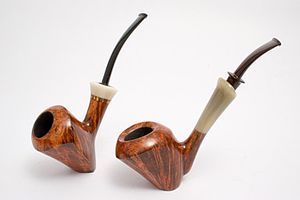 Jürgen has travelled an unusual path for a "newcomer". He did not make, as is often the case, relatively robust pipes of simpler forms, but ventured into relatively complicated style elements and very heavily practicable shapes.

There is no doubt, the pipes of Jürgen show very few loaning of shapes of other pipe makers. My personal opinion is that Jürgen makes completely original pipes! Something like that earns the highest respect, because it isn't easy to develop concepts of one's own and to stand stringently aside of the "mainstream", if the collectors are asking for "Blowfishes" or "Pickaxes".

Of course, Jürgen has developed considerably in the meantime. The finish of his pipes is of a professional quality and underlines the grain perfectly. For a "newcomer" on the scene, he has remarkably beautiful Briar and also pieces of briar big enough to realize his ideas. 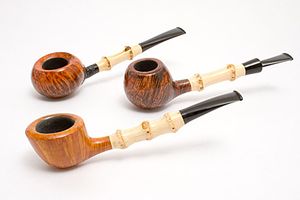 It is also the very good processing of the stems (Ebonite, Cumberland, normal drilling) to stand out in every case. All the stems are worked out very carefully, have a flat, pleasant bite and are well adapted to the shape of the shank. The pipes are partly of stately size, partly virtually filigree and are fantastic in the hand. The smoking qualities have to be described as good-natured. I have never had problems with any of my Moritz pipes. Jürgen likes to use decorative woods and bamboo in the meantime, too.

Recently, Jürgen could fulfill for himself the dream of a larger and much brighter workshop. The additional motivation he gets from this new place is reflected by his success which he had at this year's (2007) show in Chicago! 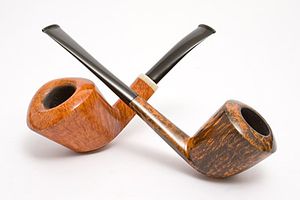 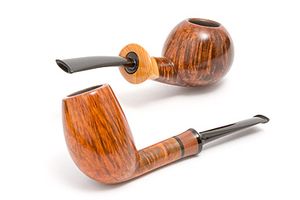 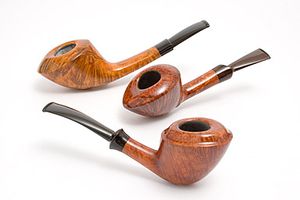 WA: What are the first things that come to your mind when you think about the journey ahead?

JM: Plane ticket... got one, hotel room... reserved one, exhibitor's table... booked one as well. It looks like I'm actually going there. Someone I met in the past, and who'd been there, told me, "that's something you must see at least once" - and I want to see it now. I always wanted to get there as a collector, but never made it in the end. Now, for the first time, I'll be there, and that, above all, as a pipemaker, on the other side of the table, so to speak. I'd be lying if I told you I wasn't in a blue funk.

WA: Of course you can't compare the shows in Rheinbach and Lohmar to Chicago, but you were able to gather a little experience with shows there, couldn't you?

JM: Rheinbach was a great opportunity for me to make a few first tentative steps into the public. And now the next step is following. In my opinion, there's no way around Chicago. There's probably hardly another place in the world where you can meet that many dealers, makers, collectors and friends of pipes, and this is a chance I want to take to present myself and my pipes, and to get in touch with others.

WA: What was it, actually, that made you decide to fly to Chicago this year?

JM: Frank Axmacher and I made this decision together when we were at the 13th World Slow Smoke Competition in Marienbach with Tom Eltang, Cornelius Mänz, Per Bilhäll, Rex Poggenpohl, and Jörg Lehmann, and when Rex in particular said that we had to show our pipes in Chicago by all means.

WA: It's certainly reassuring to know that you won't be all on your own.

JM: Man, I'm glad that Frank will be there. And we're both glad that Tom Richard Mehret will be there, too. He's been to Chicago several times, after all, and he has offered to help us. That makes things a lot easier indeed. There were others with Chicago experience who have helped us with our preparations as well. Now we only have one thing left to do: get the pipes ready, board the plane, and have fun.