Johan Kock, born in 1944, stems from an old family in the Island of Ærø (Aero). He had sailed for 27 years as a marine engineer and began to make J.K. Pipes when settling down in 1992.

Johan's pipes have their very own style in shape and size, and often exotic materials like whale teeth or petrified oak (Morta) are used for inlays and decoration.

He does the sandblasting himself on his own equipment, and he also does delicate silver work and from time to time makes bowls of meerschaum. 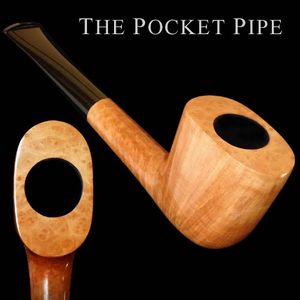 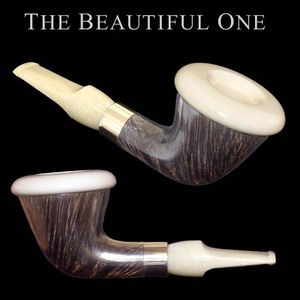 As an engineer, Johan Kock has been able to design and build pipe-making tools to meet his own exacting requirements. As a craftsman, Johan Kock believes it to be a matter of honour that all his designs are his own. He does not copy the designs of any other pipemaker.

Johan Kock is especially proud of the pipes he crafts; each one is accompanied by its own certificate describing its provenance. Whichever one of Johan Kock’s pipes one picks up, he can tell you the story behind the materials that went into crafting it. For example, some of the pipes have a stem made of petrified oak (Morta). This wood is extremely old and has been raised from the sea between the island of Dejrø and Yderodde, in the harbour mouth of Ærøskøbing. This wood is between 6 and 7 thousand years old and due to the fact that is has lain in salt water means that it has special shimmering qualities with beautiful golden and light brown tones. This is rarely found anywhere else.

Many of Johan Kock’s pipes have inlays of Greenland whale teeth and other exotic materials.

Johan Kock’s pipes come in all shapes and sizes, depending upon the size, colour and structure of the raw materrials that he has to hand. Some are large, some are small, some have light colours and some dark. The mouthpieces can be acrylic, ebony or false amber.

Johan Kock believes it is vital that each pipe should have excellent smoking properties. A special characteristic of many of Johan Kock’s pipes is an almost imperceptible transision, in the middle of the pipebowl, from the almost vertical upper walls to a virtually conical base. This gives the pipe its particular charm, especially with unusally shaped pipes. 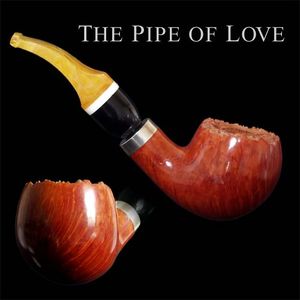 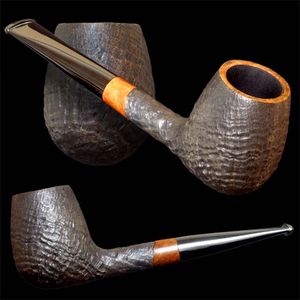 Johan Kock prefers to use briar blocks from Corsica but has also worked with briar from Greece, Morocco and France. He has fetched the French blocks himself from the mountains around Marseille; and has cut them and boiled them to remove their tension, so as to be able to craft them. It is the structure of the briar which ultimately decides the shape of the pipe. When a bowl has been formed, Johan Kock will carefully sand away any marks and imperfections. The pipe bowl is then varnished to maximise its beauty. Where a bowl has no imperfections, it is left unvarnished in its virginal state. More deeply grained bowls are given varying depths of varnish. Johan Kock will not use glue or filler on his creations.

Johan Kock has recently begun to include meerschaum inlays on his pipes.These he has wrought from pieces of raw meerschaum, (collected from Turkey).

In one year he produces about 225 pipes. The price of Johan Kock’s craftsmanship varies according to the amount of work required to produce each masterpiece. It varies between USD 150 and USD 350 or more for specially comissioned pipes.