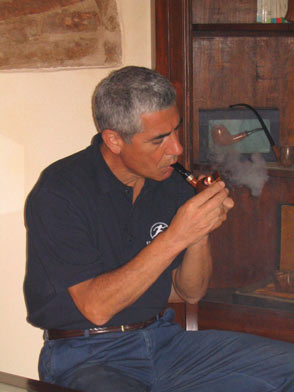 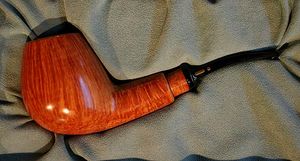 Tonino Jacono lives and works in Jesi, Marche. His profession as pipemaker started casually in 1981, when his father-in-law offered to create a new company together with him to produce freehand pipes. His father-in-law worked in the briar mill, cutting briar and plateaux for the most important Italian pipe factories; quintals of briar passed through his sawmill; it was quite easy to select the best pieces to produce important pipes.

Tonino's brother-in-law, who loved to make pipes too, had just bought some machines required to make pipes; so in 1981 the new company was born: each of the three members had different tasks: his father-in-law arranged the briar and did the drilling; his brother-in-law shaped the pipe through various sanding steps. Jacono did the final finishing of the pipes and the sales. Things went ahead ascending and descending for a year and half. In 1983 Tonino made a decision: he left Calabria and came back to Marche. 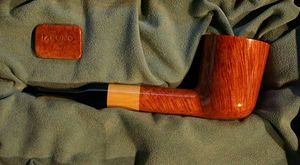 After a few months of studies, reflections, contacts, finally in October 1983, from the new workshop in Jesi, the first "JACONO" pipes were born. His philosophy was very simple: produce excellent pipes and sell them at the right price. 25 years have passed since then: the shapes and finishing of his pipes have changed, but his way of working is always the same, as is his philosophy. 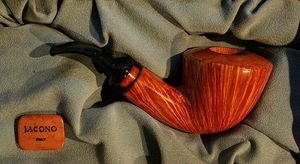 Still today, Jacono creates his pipes one by one with the same passion that he had in 1981 when his father-in-law offered him his first job. He actually makes his pipes by hand, using only lucite mouthpieces. He also uses Sterling Silver or precious woods for inlays.

The majority of his pipes are sold in USA, but he is also represented in the most important stores in Europe, Russia, China and Japan.

Jacono Pipes are available in the following grades, denoted by chess (and poker) designations:

The difference between the Rook, Jack, Queen and King grades is the quality of the grain. An E appended to the designation (as in Queen E) seems to denote a plus. 'Checkmate' denotes a larger than usual size. Jacono's goal appears to be to offer beautifully grained pipes with no flaws; if flaws appear in the carving process, they are rusticated out.

An excellent selection of Jacono pipes is available at Pipedia Underwriter, lepipe.it