From Pipedia
(Redirected from Johansen, Mogens)
Jump to navigation Jump to search

Mogens Johansen and his wife Doris operate a pipe and tobacco shop named Gaden Pibemagerie in the small hamlet Ravenhøj, not far from Frederikshavn. Mogens, he calls himself Johs as a pipemaker, makes his classical Danish freehands in the adjacent workshop. 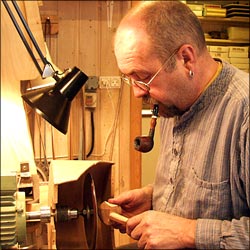 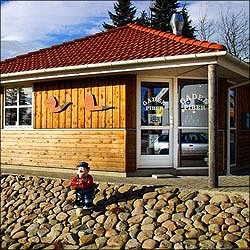 
Likely many pipe smokers have smoked a pipe made by Mogens Johansen without realizing it. For many years he made pipes for Bjarne Nielsen, and those pipes were not stamped with his name. So apart from tourists visiting his workshop in Frederikshavn, few knew who Johs was. But in 2008, when Bjarne died so suddenly and unexpectedly, Johs had to make his name known and start selling his pipes on his own. A natural first step toward becoming known was to visit the pipe show in Chicago, and he did so that same year. When sellers learned that Johs had made pipes for Bjarne, who had a very good reputation, it was not hard for him to find interested dealers.

Mogens "Johs" Johansen was born in 1953, just outside the town of Frederikshavn, and even if he has moved around a lot, he has been faithful to that area. His education was as a metal worker and plumber, but after finishing school he devoted himself to many other tasks as well. He worked as a welder, he helped build ships for a while, he was an assistant in a camera shop, worked as a stone cutter and much more. Now and then he was unemployed, and during those periods he started to make pipes.

In the late 1980s Johs met Peter Hedegaard, a meeting of great importance for Johs. The beautiful pipes Peter made inspired Johs, and Peter gave him valuable advice and suggestions. The two of them became close friends, and that probably was a contributing factor for Peter to move from Helsingor to Frederikshavn in the early 2000s.

As time passed, Johs spent more and more time in his cellar, where he had his tools and machines, and finally he decided to try making a living from pipe making. He rented an old stable, situated in the backyard where he lived, and started to make pipes full time. Most of them were sold to German tourists. But in 1992 Johs started to work for Bjarne Nielsen and continued until Bjarne passed away.

As mentioned earlier, Johs has moved around quite a lot, but since 2006 his workshop has been located rather centrally in Frederikshavn. There he makes 800 - 1000 pipes a year, and most of them are sold to dealers in the USA. Despite the large production, Johs says that he probably has enough briar to last for the rest of his life, as he bought the entire stock Bjarne left behind. And it was huge. He also has a lot of ebonite and, except for a few pipes with stems from cumberland, all his pipes have ebonite stems. Adornments from many different materials are quite frequently used.

Jhos's pipes are stamped Johs. Handmade in Denmark. The sandblasting is performed in Peder Jeppesen's workshop.