K’s Pipes had a cult following from smokers all over the world, this small time carver worked from his Kawasaki workshop in Japan. He started making pipes in his free time around 2011/2012. After entering several competitions at Japanese pipe shows and winning he set about creating the K’s Pipe Company. Using not only Mimmo briar, but also Strawberry Tree wood to craft stunning bowls, with exotic woods for inserts and skilfully shaping bamboo. His Bamboo work was some of the finest around, with seamless joins and perfectly matched undulations.

Shin-Ichi’s love for classic British shapes could be seen throughout his work, with his Dunhill LC replicas looking finer than those produced in the Iconic London factory itself. It was the often comical proportioned Nose Warmers which gained the biggest audience, with many chimneys produced which had taller bowls than the length of the pipe. His rustication methods produced highly detailed and beautiful pieces, which sadly took more of a back seat in mid 2015 when he branched out and starting sandblasting pipes, with stunning results.

Most of Shin-ichi Kuwahara’s work was done as commissions but a number of retailers and merchants started taking on his work. Shin-Ichi has potential to be one of Japans, if not the world’s finest pipe maker. 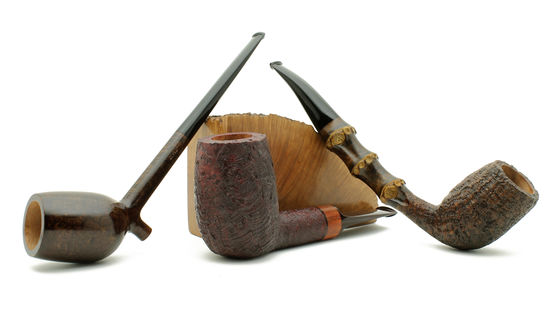 Sadly on 27th December 2015, Shin-Ichi Kuwahara passed away after a motor cycle accident in his native Japan. The news shocked many in the trade/hobby and he will be greatly missed. Having only producing about 200 pipes a year, only a small number of his work is in circulation and now more cherished than ever. The industry has lost one of the most talented and humble carvers.