Günter Kittner is a German artisan. Known as "the man with the golden hands" (an expression used in the press), Günter was borh in 1927 and was given his first pipe at 16 by his father. He lost it, however, during WOrld War II, when serving in the German army. Taken prisoner by the Russians, he made the best of his conditon by carving his first pipe out of a piece of wood -- when he was released, he only weighed 38 kilos! 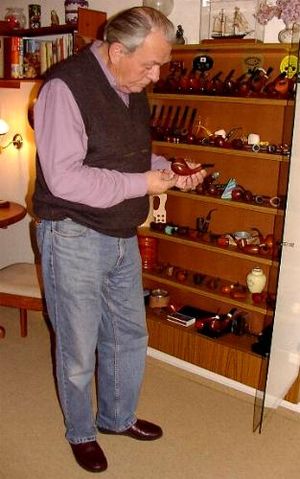 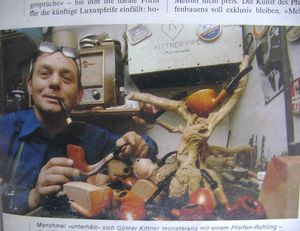 After the war, he worked as a mechanic and began repairing pipes until becoming an artisan and making his own pieces. He saw it as a hobby, but it gained him such a reputation that he met, for example, Bo Nordh, Sixten Ivarsson, and Emil Chonowitsch.

His usual shaped Freehands are remarkable, which he sculpts out of wood sent from Italy. From that time, and until he retired in 1984, he can't have produced more than 500 pipes, largly sold in Germany, with ex-chanceller Helmut Schmidt among his clients. He uses beautifully worked accessories in ivory and other material. Stamp (on some pipes): Kitner / Bremen, in a 14 carat gold lozenge.

Guenter Kittner was the first pipe maker after WWII in Germany.