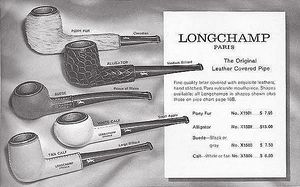 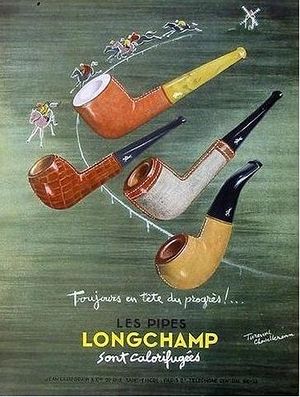 In 1948 Jean Cassegrain inherited a small shop near the French Theater on the Boulevard Poissonnière in Paris, called “Au Sultan”. Articles for smokers and fountain pens were offered there.

Now, the absolute bulk of the pipes Cassegrain found in the inventory was from war-time production and due to the sharp restrictions on pipe production the French government had enforced in 1940, these pipes were of very poor quality and showed large fills. Strictly speaking, they were not marketable now that the French pipe industry produced pipes of pre-war standards again. In this situation Cassegrain had the probably most enlightened moment in his life: he took some of these pipes to a leather worker who clad bowls and shanks in leather. Only the rims of the bowls and the shanks’ faces remained blank.

E voila – the pipes looked pretty good now and were eye-catching enough to become an instant success in sale. Above all among the thousands of Allied soldiers who populated Paris in those days. The thing worked well, and even unexperieceid pipesters liked the covered pipes very much for they did not transmit the heat to the hand. Very soon Cassegrain had sold the old stock of pipes, and the leather-clad pipes became his only product. He began to place orders with renowned firms like Ropp or Butz-Choquin.

Because the name Cassegrain was already registered as a trade name for one his relatives, Cassegrain, a big fan of horse races, named his newly created firm after his favorite race course Longchamp near Paris. Hence an outlined galopping race horse with jockey was chosen as logo. The wind mill – see the frontpage of the catalog – symbolizes the name Cassegrain.

The numerous contacts with American soldiers bestowed an official contract on Cassegrain to supply the PX shops with his leather-wrapped pipes. According to his grandson, also named Jean and now CEO of the family firm, "There wasn't an American GI in Europe who didn't have one of these pipes at the time. They were exported and sold in PXs worldwide. That's how it all started."

In the course of the following years Cassegrain enlarged and refined the Longchamp pipe program continuously. More precious kinds of leather like calf and suede came in use. The top range was clad in alligator leather and even pony fur was used. In addition, many models showed vibrant colors now, and small sized pipes, the “Royal Mini”, made that also women interested themselves in the pipes. The hype was pushed furthermore, when well-known persons of public interest, like TV moderators or pop icon Elvis Presley, began to flaunt with a Longchamp put on.

The Cassegrain family expanded their business in 1955 starting a sortiment of pipe bags, tobacco pouches, pipe stands, ashtrays, tampers, lighters – all made of or clad in leather. (Going from there Longchamp turned to other gentleman’s leather-goods around 1960 and finally established itself as a global brand at the end of the 1960’s introducing the Xtra-Bag for ladies.)

After 1970 the interest in leather-clad pipes slowly diminished. The Longchamp pipes were offered for the last time in the 1978 catalog though previously placed orders were delivered until 1980.

The splendid success inspired many other renowned producers to offer their own lines Ropp, Butz-Choquin, Gubbels, GBD, Sasieni... Maybe Savinelli was the very last producing them for the label of the famous designer Etienne Aigner.