Creator of the Alco brand. The name is often said to stand for Mary Linkman & Company. Mary Linkman was the mother of Louis B. Linkman, originator of the Dr. Grabow pipe. This Chicago company produced meerschaums and briars both. 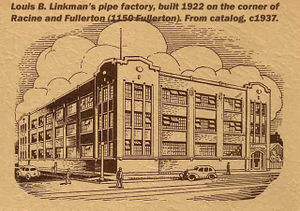 The Louis B. Linkman pipe factory, built 1922, from circa 1937 catalog, courtesy Doug Valitchka 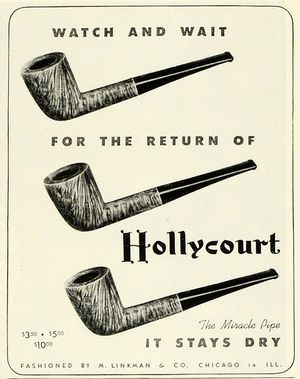 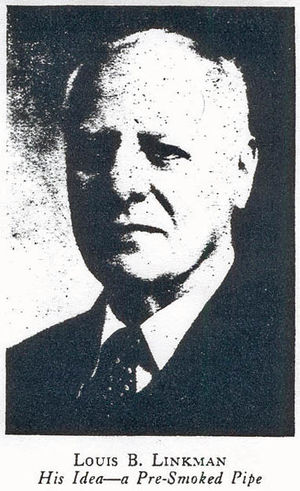 The Story of an Idea

Louis B. Linkman, Co-founder of the Pipe Company of that Name, Invented the Idea Of Pre-Smoking Pipes Before Selling Them by J. Harte, from the June 1946 issue of PIPE LOVERS magazine. It appears here courtesy of Russell McKay, and his site, drgrabow-pipe-info.com

BACK IN 1898, two ambitious young men reached the momentous decision to go into business for themselves. They were Louis B. Linkman and August Fisher. From the time they were in knee pants they had worked for a pipe jobber in the mid-west.

Diligently saving a portion of their earnings, they accumulated a few hundred dollars, and in 1898 formed a partnership under the name of M. Linkman & Company. They opened a small shop on Lake Street, Chicago, employed two additional people, and started to manufacture pipes. {The article never mentions what the "M" stood for, or the reason for the name chosen.}

In 1890 {? -- 1899, perhaps?} another young man, Anton Burger, who had also been employed by a pipe jobber in the mid-west, approached them and was taken in as a partner. M. Linkman & Company proceeded as a partnership; the business developed rapidly through the untiring efforts of these men in producing quality pipes and rendering good service to their customers.

The business continued to grow, and in 1907 M. Linkman & Company was incorporated with Louis B. Linkman as president, August Fisher, vice-president, and Anton Burger, secretary and treasurer. In 1914, Richard J. Dean, who had joined the firm in 1911 was appointed general sales manager.

The business was growing and expanding rapidly, and the executives soon realized the quarters in the Wells Street Bridge Building were inadequate, so in 1922 Linkman built a modern three-story reinforced concrete building at the corner of Fullerton Avenue and Racine, housing one of the most complete and modern pipe plants in America.

(Editors Note: This is the sixth in a series of historical articles describing the early growth and development of the leading pipe and tobacco manufacturers. Another will be presented next month.)

THE COMPANY continued to grow, turning out quality pipes that were recognized wherever good pipes are appreciated, and the continued success of the organization was due in no small measure to the foresight and sound business principles of Louis B. Linkman's leadership.

Linkman himself kept abreast of the times, studying the pipe smoker carefully, trying to analyze what the pipe smoker most needed -- what he most wanted in a pipe as well as what was least desired.

Linkman soon learned that one drawback to increased pipe enjoyment was the unpleasant breaking-in period. Many smokers, he found, hesitated to buy a new pipe because they dreaded those first few puffs.

Why not, thought Linkman, smoke those first few puffs for them? If a pipe could be put on the market that would be already broken in smokers would not hesitate to purchase it, and increased sales would be the result.

Linkman gave the problem much thought. Believing he was on the right track, he wondered how pipes could be "pre-smoked" in the necessary quantity to fill the anticipated demand.

He considered many ideas, such as chemically treating the inside of the bowl which would reduce the unpleasantness of the breaking-in period, but smokers, he found, did not accept this method. Pipes must, he concluded, be actually pre-smoked with tobacco -- no chemical or artificial process would do.

Early in the 1930's he experimented with an automatic machine which would smoke the pipes mechanically, and in 1933 he made pipe history by introducing the first pre-smoked Dr. Grabow pipe. {Interestingly, no mention is made in the article as to why the pipes had this name!.}

Pipe smokers, both beginners and veterans, found in the new pipe something they had long wanted -- a new pipe that had been pre-smoked for them, thus eliminating to a large degree the unpleasantness of smoking those first few pipefuls.

A LUCKY break in the way of newspaper publicity helped immensely in publicizing the new pre-smoked pipe. Bob Ripley, artist who draws the famous "Believe It or Not" cartoons, felt the new automatic pipe smoker was worth mention in his feature, and he included it in one of his sketches a short time later.

Newspapers also saw the human interest appeal in this novel method of pre-smoking pipes, and several articles appeared, which resulted in very favorable publicity for the Linkman Company and its products. So great was the interest in these pipes that the company inaugurated a national advertising campaign on a grand scale.

This has been kept up until the present day, and the Dr. Grabow Pre-Smoked Pipe may be currently seen in leading newspapers and national magazines. Many of the advertisements have pictured famous men smoking Dr. Grabow pipes, but most popular have been the messages in cartoon form which have been well received by the general public.

The ad reproduced with this article {omitted on this web page} was one of those used in the ad series, and was recently selected by Advertising Age Magazine as an outstanding piece of work in its line. Several of the cartoons have been drawn by nationally famous cartoonists.

Many an owner of a Dr. Grabow pipe has wondered how the robot smoker operates. It consists of long rows of tubes which are fitted with the pipe bowls. Then, by means of a system of alternate vacuum and forced air, the slow, deliberate "puffing" action of the smoker is duplicated.

A good grade of smoking tobacco is used in the process. {At least some ads say EDGEWORTH.} The bowls are filled, lighted, and slowly smoked to the bottom, cleaned out, filled and relighted again. This continues for several pipefuls, until the pipes are thoroughly and completely broken in.

The process is essentially the same as the careful pipe smoker gives his pipe, in that the puffing is very slow and even. The pipes are cooled between pipefuls, and all the care that a pipe should receive during the breaking-in period is given the Dr. Grabow.

Mr. Linkman has never claimed the process to be anything mysterious, secret, or fantastic. It is all very simple and plain to see. The bowl is easily examined without aid of a laboratory or skilled research technician. It's pre-smoked with fine tobacco, and that's all that is claimed for it.

THE SUCCESS of this concern from its inception is due to a great extent to the personal efforts of its president, Louis B. Linkman, under whose guidance the firm has grown to its present coveted position in the pipe industry.

The foundation of this business has been firmly built on the policy of fair dealing, quality merchandise and good service.

Linkman's hobby is his business -- {his?} credo is to give the public better merchandise at lower prices. As with many makes, Dr. Grabow pipes served in {the?} war. A large portion of the factory's production was sent to our fighting forces, causing a scarcity among civilian smokers at home.

And now, as restrictions on materials and manpower begin to ease, production is being stepped up to meet the demand. And to help meet this demand, the company is presently constructing an additional building which will double the present output of pipes.

The Linkman Company, now in its 49th year of pipe manufacture, looks back upon this first half century with pride, knowing that these years of experience will enable it to continue to provide pipe smokers everywhere with {added?} smoking enjoyment in the next half century to come.

A photo and query from August Fisher's granddaughter:
I inherited this photo from my grandmother, Elsa Henrich Fisher, who passed away in 1968. The typed info at the bottom was handwritten on the back of the photo, along with Mrs. Mary G Linkman's obituary. I never knew my grandfather, as he died in December 1933 while my mother was still in college....way before I was born....
One of my cousins is wondering, that since my grandfather was a co-founder/co-partner in M. Linkman and Co., did his share in the company pass to his wife Elsa/or 3 children when he died in 1933? I know the company grew for the next 20 years, and that Mr. Linkman didn't retire until 1952 and then passed away in 1957. Who was the land at Fullerton and Racine purchased from where the factory was built in 1922? When the building at 1150 W Fullerton in Chicago was sold, how much did it sell for? Who benefited? I know one of his sons, Glenn J Fisher, was listed as Treasurer on a letterhead, along with Mr. Linkman's step-son, Arthur Dobler, as VP in later years.

Anyone that might be able to help provide information as to the building and property, or any other details to the family can send them to sethile.pipes@gmail.com, and I will happily forward them to Nancy.