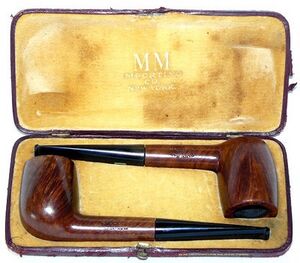 Sasieni made examples in a cased set, from an eBay listing 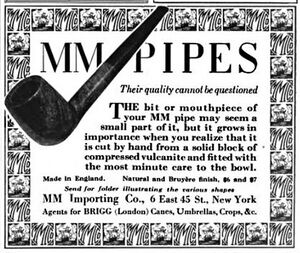 Also, an early 1920's-30's Comoy's made example, marked, LEFT SIDE STAMP: M M IMPORTING Co., RIGHT SIDE STAMP: MADE IN ENGLAND (rugby shape, with "IN" in the center) BRUYERE. This one has a 9k gold band marked: M M, <9> [375] (f) and London lions face. This pipe has a long rectangular light blue bar, but is not stamped with the words "BLUE BAR" as the Sasieni pipes were.