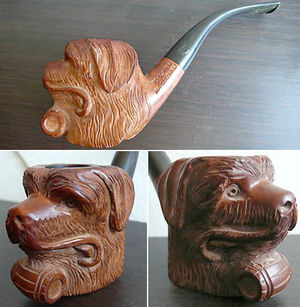 Still a committed union man, Masson was a solderer who later learned the art of working in wood from the old masters.

He has produced countless objects, and started making pipes in 1970. In the following year he had Jules Guichon's classic shapes workshop. Jules taught him about classics, as Denis Vincent did with sculpted shapes.

Today he works alone, with Moroccan briar, and only sells directly and not to shops.

With their natural finishings, sculpted pipes are one of his specialties. "The first model takes a lot of work to produce, but after that, the other are made using the pantograph", he explains, whilst telling us that his major successes have been the bowls depicting Geoges Brassens, Cyrano de Bergerac, and Price Charles.

Most of his pieces incorporate a chamber to liquefy the nicotine, a creation he defends with fervor. Good freehands, many with a plateau bowl, predoninantly with a vertical grain. He makes 250 to 1000 sculpted classics and freehands a year.