We previously reported that there were unconfirmed stories Mauro Cateni was an actual pipe maker who displayed his pipes at shows, but no one could verify having actually seen him, let alone having purchased a pipe from him. Thanks to information uncovered by Stefan Petzuch and Jens Olaf Stehr, we can now confirm that Mauro Cateni was simply branding, and not an actual pipe maker.

Stefan Petzuch recently bought a group of estate pipes, including a Mauro Cateni. While they were researching, Jens Olaf discovered the German trademark registry shows that "Mauro Cateni" was registered as a trademark for "pipes and other smoking articles, imported from and exported to Italian speaking areas" in 1979 by a then German tobacco wholesaler named Gebr. Heinemann KG in Hamburg. It was extended once in 1999 and discontinued at request of the brand owner in 2010.[1]

The origins and relative merits of Mauro Cateni pipes have been difficult to nail down. This is not unusual in the pipe world, of course, but this brand having been named after a person, one would assume that person was either a pipe maker, or somehow affiliated with the company making the pipes. We can finally confirm that this is not the case with Mauro Cateni. 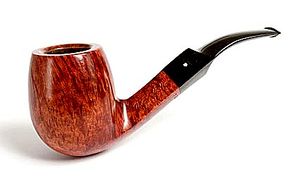 The following are three critiques on the relative merits of these pipes. As you will see, these pipes are enjoyed by one, avoided by another, while the third finds middle ground between the extremes.

Experience three: by Stefan Petzuch (who has also clarified the mystery of the brand's origins)

About the pipe: I agree with both reviews in the article. The pipe I have is a fine piece, nice grain, handcut stem and properly built. But it has a huge putty spot on the bowl (see images).

SYSOP's Note: Thanks to everyone who contributed to this article over the years. The evolution from general speculation to emerging facts shows the power of collaboration facilitated by the wiki concept. If you have any further information on this brand, or who made the pipes for Gebr. Heinemann KG, please add it here, or send it to sethile.pipes@gmail.com and we can add them for you.