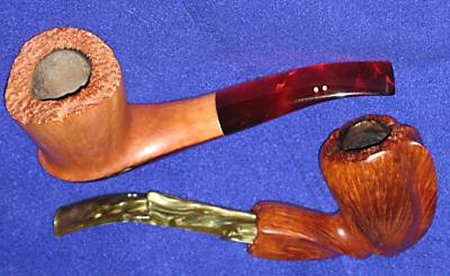 Clarence Mickles a pipemaker from Park Forest, Illinois, sadly passed away on Friday, August 10, 2001. He was affectionately known to friends as the "Mechanic" or the "Magician", due to his background as an auto mechanic and his legendary expertise at pipe repairs. He was highlighted in a Pipes and Tobaccos Magazine article called "Pipe Mechanic" in Volume 2, Number 4 of that magazine.

Mr. Mickles made pipes for more than thirty years, beginning as a part-time maker and for the last five years or so of his life pursuing pipemaking full time. Throughout that time he was a regular member of the Chicagoland Pipe Collectors Club where he often donated a pipe at the Club raffle. He was also a fixture at the Chicagoland pipe show and others around the country often traveling with the famous Castello collector and close friend, Chuck Rio and other Chicago Club members. As a result he was a friend to a great many in the pipe smoking community.

Mr. Mickles was an innovative pipe carver. While many of his pipes were large and heavily rusticated, he also brought a Danish style to his "Swan" shape, and took the Hawkbill shape to new heights. He even at some point made briar pipes designed to look like corncob pipes. The Mickles logo was two white dots on the stem, "...twice as good as a Dunhill!" He was also noted for his Herclean repair work which included many cracked or split bowl Dunhills.

One pipe collector is quoted as saying that "The pipe collecting community loved Clarence. He was a great American pipe carver with a wonderful good nature, who exhibited every year at the Indianapolis, Richmond and Chicago pipe shows among others."

Mr. Mickles signed his pipes with one, two or no dots on the stem as well as both red and blue bars, the latter used only very briefly. More commonly seen is a stamp with his last name, USA, and the year the pipe was made.