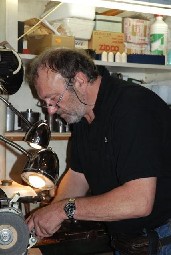 In 1978, Pierre Morel, an independent free-hand pipe maker, was enlisted by Chacom to create a line of completely hand made pipes, called the Chacom Grand Cru. For this line he created the free-hand shapes Naja and "Fleur de Bruyère". In 1987, Pierre Morel joined the team at Chapuis-Comoy full-time.[1]

Still employed at Chacom, Pierre Morel will be 60 in 2009 and must retire from the house that employs him.

When asked by "Pipe Gazette" in February of 2009, "If there should be a pipe of Pierre Morel, it would be what form? ", Mr. Morel responded, "Flower Morel, I've probably made hundreds."

Pierre works now in his own shop. The new line is the result of over 40 years experience in free-hand high-grade pipe carving. His new High-grade line will be available on his new webshop.

For in-depth interviews of Pierre Morel made by Erwin Van Hove, turn to Fumeurs de Pipe and to Pipes and Tobaccos.