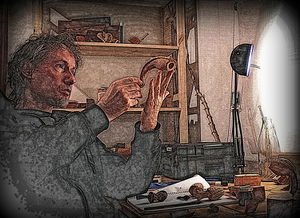 I was born in 1966 in the city of Stuttgart in Germany. After living abroad for a few years I settled down in 1995 in the south western part of Germany where the Rhine Valley meets the Black Forest about 20 minutes from the French border. 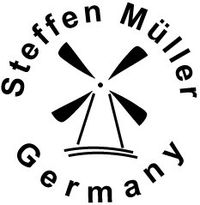 Are you a pipesmoker? If so, what are your favorite pipes and tobaccos?


I am a pipesmoker since the age of 14. I have an old picture of my father, who was a sailor at that time, with a pipe in mouth at the ship's steering wheel. As a kid I always wanted to be like him in that picture. I still have his pipes.

My favorite pipes are either good smokers or are related to people dear to me like family or friends. When working on complex shapes I tend to smoke simple shapes to keep my mind clear. I like to smoke tobaccos containing Latakia (as a reminiscence to the sailors ;) ) but also Virginia/Perique and even an occasional (English) Aromatic. 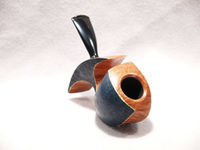 When did you start? Did you get any guidance from established carvers?


I guess I'm a late boomer as far as pipemaking is concerned. I made my first pipe in 2009 because I wanted to try something new and soon discovered I was hooked to it. At first I only made pipes for myself because I thought they were too crazy for others. But after a while people began to ask if they could buy my pipes, so from 2010 on I set up a small workshop and sold what I made. The first guy to buy one of my pipes was Roger Wallenstein. 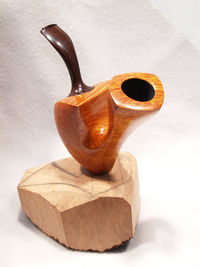 I am mainly self taught, mostly by looking closely at good pipes and by trying to make good things better (or at least my way) using functionality as a guideline. One of the first established carvers I worked with was Bertram Safferling, a great teacher and now friend. But I also listened closely to the good advice given by Rainer Barbi and Cornelius Mänz. Maybe the best advice in pipe design however was given to me by Roger Wallenstein: „Do your own thing, don't let others tell you what to do!“

What motivates you? Are you influenced by the work of certain carvers?
While I also like classic pipes, the pipes I make have to have a certain kind of fluidity to them. They must be an adventure for the eye and the hand as well. Like a good story, there has to be an unexpected turn or approach to the shape. I like taking principles one step further as in my Salto Mortale pipes, where the principle of the bent shape is taken beyond the possible. Or as in my Bota and Birdy shapes, where the „normal“ proportions are simply turned around. Very often bents and twists and turns are used that may seem impossible to drill at first glance. My aim is to challenge the imagination of the perceiver as well as to give an impulse for his own imagination. In the end a pipe - as I see it - is a means of transporting and arousing emotions.

Like every pipemaker I am influenced by other carvers. For me it is mostly pipemakers who were or are pushing the boundaries of the established way to make and see a pipe. First to be named of course is the great Sixten Ivarsson but also pipemakers like Hiroyuki Tokutomi] and Michail Revyagin. Mutual inspiration comes through the constant exchange with the free minds of friends like Roger Wallenstein and Christian Wolfsteiner.

What briar source do you use? How long do you cure the wood?
My briar is carefully selected from various sources in Spain, France, Italy and Greece giving me the opportunity to chose according to shape and desired finish. The briar is cured from several months up to several years, the oldest briar I have is now almost 40 years old, which is very good for certain finishes.

What materials are your stems made of?
I use mostly German ebonite for my stems. This is a personal preference but I feel that in terms of feel and deep warm shine there is nothing better. If required by the customer or the design of the pipe acrylic is also used, as well as other materials but this is quite seldom.

Do you use decorations that are typical for your style?
Being a synesthete a line or a shape for me is not only a line or a shape but also an impression of body movement, color and sound. This is why I don't use too many materials on a pipe and my pipes have a distinctive but also a clear shape. If the over all impression of movement, color and sound I get from a shape is harmonic the pipe is good for me. Too many materials on one pipe or if the shape gets too wild or fissured makes the pipe too „loud“ for me. I do experiment in that direction from time to time – but most of the time briar and ebonite is all it takes for me to say what I have to say in a pipe.

How many pipes do you make in a year?
Attention to detail, thoroughness and care especially in the finishing process limit the production of course but I am constantly working on improvements without having to compromise on quality.

Do you make pipes in all finishes? What is your favorite finish? Why?
Most pipes I make have either a smooth or a Driftwood finish, I learned from Roger Wallenstein and altered to my own needs and taste. At the moment I like experimenting with rustications, sandblasting and various combinations. The Driftwood finish is one of the very best ways to bring out birdseyes on a pipe.

Describe how you make a pipe.
Making a pipe is a process that starts long before touching the briar with any tool. There are several ways to start: Either an idea out of my book of sketches is looking for the suitable block or the specific grain of a block gives me an idea of what to do with it. In either case the communication with the wood is an important process prior to working with tools.

After sketching the pipe directly onto the block, the block is either drilled or shaped before drilling depending on the shape. The shaping is done on the disc sander and by hand but also with different rotary tools. Smooth finishes are sanded to high grits. Staining and finishing is where the pipemaker's secrets start. A high grade smooth finish that does not wear off takes up to two weeks time.

Explain your grading system.
I do not have a grading system and I don't think I ever want one. Each pipe contains the maximum of what I was able to do at that moment. It is like a snapshot of me at the time when the pipe was created. Grading is something that takes place not only on the level of craftsmanship but even more on an emotional level. This can only be done in interaction with the person regarding a pipe and I don't want to tell people how they have to see my pipes. I want them to have their own emotions.

Is there anything about your pipes you want to point out?
Many people seem to look at a pipe as if it were lying in their hand. I make my pipes the way I photograph them: Lines and surfaces and details should be viewed as by a diver exploring a marine structure.

I want my pipes to be good smokers. That's why I pay a lot of attention to engineering details like tenon fit and air flow. The feedback from my customers is very important to me and I am happy they not only like the look of my pipes but also give me praise for my stems.

I want the new owners to be just as happy with my pipes as I am in making every single one of them.