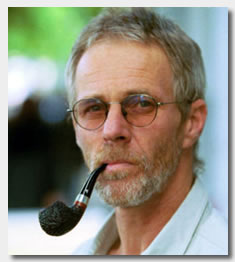 Corners and edges are not terms that are typically associated with classic pipes. However, creative pipe makers love them. The Berlin pipe maker Nils Thomsen has all those characteristics: corners, edges and creativity.

Former Major in the East German national peoples' army at first sounds sobering, almost intimidating however this is only one aspect of Nils Thomsen's complex character and moved life. A certain loyalty to the communist political system was necessary. However, in every totalitarian system there is an individualistic foundation that in the case of Nils Thomsen would cause him to distance himself from a blind following of communist initiatives.

Thus, his days as a Major in the East German Military were numbered as his conscience and world political view began to change at the end of the 80's. During this time the theories of Clausewitz and Gorbatschow came together and that was the turning point for Thomsen. Clausewitz once remarked that “war is the continuation of politics with different methods”. Years later, Gorbatschow interpreted Clausewitz's theory by asking if “war makes sense as a continuation and a method of politics, when it is possible to wage a war with atomic bombs?” Nils Thomsen answered this question in a philosophical essay at the military academy, knowing that his career might be adversely affected upon submitting the essay.

Thomsen's career as a military officer was affected sooner than he had anticipated. The Berlin Wall fell and left Nils Thomsen with nothing, causing him, like any family man, to consider his options. Nils's family had a long tradition of professional woodworking and building and subsequently, such skills ran through the veins of the former military officer. For this reason, Nils started a small company that specialized in finish carpentry and brick-laying. While continuing to craft pipes for himself and friends in his spare time, Nils's small building company would grow into a staff of more than 100 employees, working in several cities, managing several projects and taking an ever increasing toll on Nils Thomsen's health and family life.

In 2001, at a peak in financial success, Nils's health gave out leaving him hospitalized with a pulmonary disruption and causing the passionate pipe maker to consider his options again. “When you become critically ill, you start to think about things in a much different way.” “My job caused a vicious circle. High expectations and a commitment to quality led to success and a lot of money, but it was a spiral. I gave up time with my family, friends, and hobbies for the pursuit of a better tomorrow.” A classical retail shop with space for a workshop would allow Nils Thomsen to turn his hobby into a profession while providing him with time for both his family and friends.