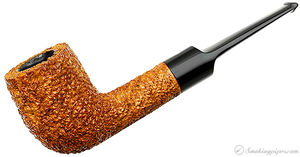 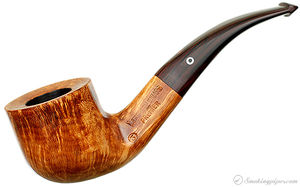 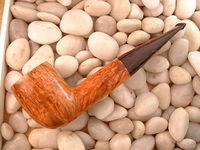 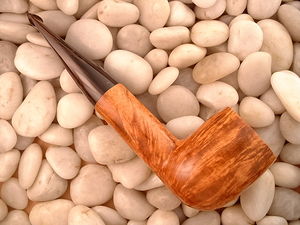 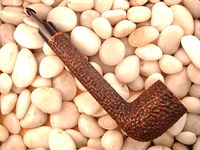 Ian Walker makes the Northern Briar Pipes in his small shop in Stockport England. His rustications are deep and beautiful. He calls he rustications ROX CUT. His "PREMIER" series are his better pipes, and the "REGAL Series" is a little less exacting than his Premier series. All of Ian's stems are hand cut either from Vulcanite or Cumberland rod stock.

The History of Northern Briar Pipes

Northern Briar was started by Ian Walker's Grandfather, George Walker, who started working for Duncan Briars in England in 1922, and in 1931 became the factory foreman at Duncan Briar's. After a nine year apprenticeship he was in charge of training the staff of pipe makers and pipe finishers. In 1958 he left Duncan's after 36 years.

In 1958 Ian's Grandfather and Ian's Father, Peter Walker, started a pipe repair service, repairing pipes for tobacconists' all over the United Kingdom.

In 1972 Ian left school and started work in the family business. His first day at work he had to sweep the floor of the workshop for an hour, make coffee, and only then was he allowed to polish some pipes!! Then his dad told him to go home, change clothes and go to his grandfather's house where he spent the evening making silver rings for pipes from a silver sheet.

In 1983 his parents bought a Tobacconist Shop in Heaton Moor, Stockport, England. Ian was doing all the repairs by then, and was the foremost repairman in the U. K. He thought that he might give it a go at making pipes himself for the shop. This went well. Ian then decided to start making pipes for the local shops. Soon after he met Bill Taylor of Ashton fame. Bill encouraged and helped him.

In 1999 Ian did his first trade show for Tobacconist and Pipe Clubs all over the United Kingdom. Last year he made the pipe for the 2005 British Pipe Smoking Championship. He had to make 50 pipes that were all the same.

In 2006, he did his first show overseas in Chicago where Skip Elliott saw his work and decided they would be a great addition to our current selection of English Pipes we now carry at The Briary. Later this year, Ian will be taking his Northern Briar Pipes to exhibit in Dortmund, Germany.

Ian Walker uses Italian briar from the same source as Bill Taylor. Every pipe is totally hand made by Ian Walker and all have hand cut stems. Bill Taylor says that Ian Walker does the best stem work in England. His pipes are in the best tradition of classic British pipe making.

An interesting aside is that Ian lives with his wife Katerina on a canal boat. His work shop is on the boat. Under British law he can only be moored at one spot for two weeks. So every fortnight Ian moves his house and workshop to a new location on a canal or river in the England.

Pipes Available from: Smokingpipes.com, pipes2smoke.com, and The Briary

An excellent selection of Northern Briar pipes is available at Pipedia Underwriter, Pipes2Smoke.com