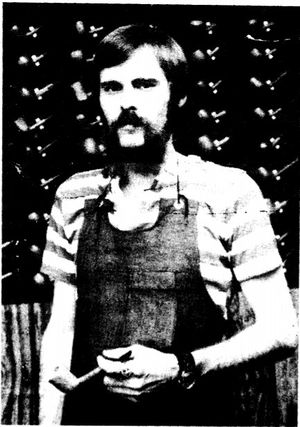 Ron Pellegrini, from an article appearing in the The STATEN ISLANDER Shopping Guide, courtesy Guido Morvillo

Ron Pellegrini made pipes for his own pipe shop, The Sovereign Pipe Shop in Staten Island, New York, which were stamped as Sovereign pipes. Mr. Pellegrini's store closed in the mid-1980s, and he no longer makes pipes.

From one of the articles in the The STATEN ISLANDER Shopping Guide:

Sovereign Pipe Shop
"If someone were to have come up to Ron Pellegrini 1 1/2 years ago and told him that the business he was planning to open was a pipe dream, Ron couldn't really have given that person an argument. Ron is the proprietor of the Sovereign Pipe Shop at 54 New Dorp Plaza. "This is not a commercial type shop." he explains; most of the pipes which he sells are made by his own hand out of natural briar. The shop also offers Ron's own special blends of tobacco - tobacco which is not prepackaged, and which contains no additives or preservatives. In addition, Ron does pipe repairs right on the premises, and he sells accessories like humidors, pipe holders, ash trays and tobacco pouches."

While Pellegrini did produce machined standards, he made them from briar blocks himself. They sold for $10 each in the early 1980s (Staten Island customers did not want to spend over $15 for standard shape pipes). Ron also made Freehand pipes. His pipes were only available for sale in his store.

Guido shared the following recollections of his visits with Ron at the shop:

"I purchased many freehands from Ron when he had his store. The attached photos are not only good examples of his higher-end work, they were specially crafted for me. You will see on Photo 5c the stamp "SK" he used that for some of his high-end pipes. The "SK" stood for "Sovereign King".

In the front of the Sovereign Pipe and Tobacco Store, Ron set up a very nice lounge area where customers would sit and have a pipe full. The area was complete with bookcases containing the entire collection of Sir Arthur Conan Doyle's Sherlock Holmes books in addition to other books on the subjects of pipes and tobacco.

On three occasions, Ron and I relaxed in the lounge area while I described the shape of a pipe I wanted. He would then sketch out my dream pipe and in a few days, I had the pipe. I must say the pipe produced was spot on in all 3 cases to the original sketch. I just wish I had those sketches now. In the years that followed I purchased and was gifted hundreds of pipes. However, not since then have I experienced that level of enjoyment in the world of pipes..."