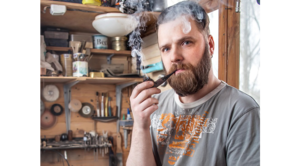 Alexandr Penkov was born in Omsk, Russia in 1981. He studied at Omsk State University, first in mathematics and after a couple years he switched to psychology.

Alexandr has smoked pipes for nearly 11 years. At different stages of his life he was fond of pipes from pipe makers such as Florov, Japanese and Danish pipe makers. He is rather inspired by Toku’s freethinking, elegance of Ilsted lines, Eltang’s and Former’s classical shapes and DOC’s painstaking diligence.

Penkov made his first pipe made in 2005. That was purely experimental, using birch burl and a mouthpiece from another pipe. Making that pipe was so exiting that he resumed his experiments with different materials (even clay) and pipe making became his favorite hobby.

In time Alexandr increased his knowledge, pipe making skills, and necessary equipment. Initially making pipes from any available materials, he improved his techniques and switched to make briar pipes. His hobby turned to passion and art, allowing him to relax after his job, and finally to his work (Alexandr is considering becoming a full time pipe maker).

Alexandr uses the best Italian briar, German and Japanese ebonite, as well as some special and sometimes exotic materials.

An excellent selection of Pencov pipes is available at Pipedia Underwriter, lepipe.it