Note: Sad to report that Bob Swanson, of Perry White Pipes joined the fellowship of broken pipes (July of 2020) after struggling through a debilitating disease.

The story of Perry White pipes in Bob's own words: 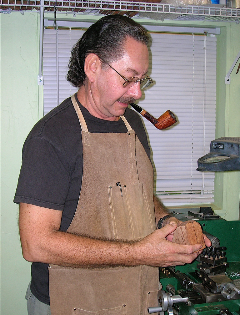 I made my first pipes around Christmas of 1975. I started smoking a pipe regularly in 1967. Even then, smoking what I think I remember they called a "Falcon" pipe, a metal base into which you screwed briar bowls, I was a "collector. I could not wait for the corner drug store to get in a new batch of those bowls so I could pick out a new style I did not have. I think I actually had them all in those days. I would give a new bowl to the brother of a barber friend of mine and he would "break it in" for me by burning the inside with a jewelers torch he owned. Man he really torched some of those bowls. Then one day I discovered... real pipes. I had not noticed them before because they were in the "expensive" section of the drugstore. I reached out and bought my first Weber. Yup, I "collected" those too, one every week, purchased after pay day. Tradition.

Then, one day I wandered into an actual Pipe Shop. It was there, through the care of the shop's owner, I was introduced to another tradition; Charatan's pipes. And so I began to collect and smoke them, for over 40 years now I have been smoking pipes. Tradition. It was also through that pipe shop I joined a pipe club and met a pipe repairman who became a best friend. His name was Dave Hunter and he was one of the best in what was called the "five State area" based in Minneapolis, Minnesota. Dave encouraged me to start making pipes. And as I said, I did in 1975. I really did not make that many and the ones I made, Dave would always fit the bits for me because in those days "carving" a pipe was not just a general term, and I did not have the equipment needed then for bit making. Most all of those pipes went to friends. That is why I made them, to give to friends, or get them interested in pipe smoking. I probably made between 30 to 40. Then things changed as life does and it became one or two a year and then I just stopped and kept buying Charatan's. I also bought many Estate pipes and Dave would redo bits and in some cases refurbish them. I learned these skills from Dave. Dave sold his business out for health reasons and moved away to the Dakota's to die, as he told us. He did. I had learned some things from Dave about pipe repair and I started repairing pipes for friends and occasionally for money. That soon became an interest in refurbishing pipes and the refurbishing grew as the Estate market grew. I have met so many craftsmen in the "pipe business" who have been so helpful and many who have became wonderful friends. The person Dave sold his equipment and business to was named Lee Erck(Lee von Erck). The first time I met Lee he was wearing a Cowboy hat and it was at a pipe show. It was the start of a good friendship. When we talked, we discovered our mutual "bonding" in knowing Dave Hunter from different perspectives. Although if you ask Lee, he will tell you he too learned some things from Dave. Over the past two or three years I have spent time with Lee Erck in planning and learning about my pipe making. I have been to his seminars. Lee spent time with me at my home in Florida and I went to the Upper Michigan Peninsula, the "North Woods", to spend time with my friend and Mentor in his pipe making shop. If you look closely at one of Lee's pipes a "VonErck Classic", you will notice the engineering and the symmetrics. Lee is one of the supreme masters at this, symmetrics. That is one of the major learning tools I took away from my time with Lee. I want to bring that to my pipe making also. Tradition. 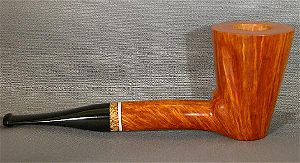 Let's talk specifics in "engineering". First let's establish this; natural blemishes which are usually grains of sand, usually smaller than a pen point and most small as a pin point and most often are indistinguishable, especially after the pipe has been stained. Blemishes are not flaws, they are usually made naturally from the briar surrounding a piece of sand as the briar grew and some can be seen with the naked eye. A flaw could happen the same way but would be a small pocket of sand, thereby making a larger mark on the briar. Blemishes and flaws are hidden by a pipemaker through rustication, staining, and sand blasting. Personally, I will not sell a pipe which has a flaw which has to be filled... because, it is detrimental to the engineering of the pipe. I smoke them myself or give them to friends. Perry White pipes are all cut from some of the best briar root available which has been air cured for at least two years and as much as fifty years with some pieces I have acquired. Each Perry White pipe as it is carved is put through a proprietary curing process.

All right, admittedly, some inspiration in some Perry White pipes, for shapes, may be seen coming from my many years of attachment to Charatan's. The influence is there... sometimes.

In order to promote faster and more effective caking in a Perry White pipe, first the inner bowl is finished to a texture which itself promotes better caking, then each inner bowl is clear coated using organic ingredients to protect the inside of the bowl during break in and encourage caking. You can see the grain inside the bowl. No stain is used inside the bowl. 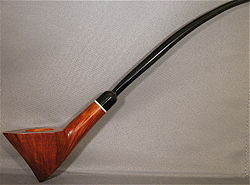 Parts of the Perry White pipe you cannot see like the inner draft holes in the shank and in the bit itself are not only drilled to precise "open" specifications, but additionally are reamed to the same specifications. One of my pet peeves over the years is not being able to get a pipe cleaner easily through, or not through at all, a pipe. So my pledge to you is no Perry White pipe goes out of the shop into which you cannot slide a pipe cleaner through with ease, to the bottom entry of the draft hole into the center bowl bottom, even if the cleaner is a fluffy tapered cut.

Most Perry White pipes are fitted with delrin tenons. Delrin tenons are more flexible and allow more easy manipulation of the bit to the pipe. Always rotate the bit in one direction as it is taken off or replaced. Further, the tenon in most Perry White pipes being 1/4 inch in diameter allows for the shank of the pipe to be thicker, allowing less chance for breaking, through use.

Tobacco holes in Perry White pipes are drilled using the finest drill bits hand ground and machined by one of the best tool and die makers in the country to exact specifications for both English and Taper shape bowls. Additionally, the Perry White pipe comes with a ninety-day guarantee against bowl burn out which you receive with the pipe you purchase.