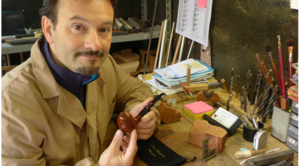 Ivan Romagnolo was born in 1969. He has a great passion for Pipes. He lives in Italy in Mongrando, Piedmont, which is in the Province of Biella He made his first pipe only a few years ago, but Romagnolo Pipe was conceived in 1982 when, at the age of 13 he went for the first time to the newsstand in Bianze where he lived at the time in the Province of Vercelli. The newsagent was a Pipe Smoker, and it happened that he was smoking his pipe when Ivan first entered his shop. Perhaps because he was very young, perhaps it was destiny, but he was kidnapped by the ritual and the aromas. That is when he fell in love with the pipe. He did not immediately begin to smoke pipes, or to build them, but the seed was planted.

The desire to build pipes came to Romagnolo after twenty-five years of experience as a cabinetmaker, an experience that allowed him to acquire the manual skill and knowledge of woods and to create what he considers small works of art. He learned pipe making from an elderly (and very experienced) pipemaker in his area who shared his vast experience.

In 2015, after almost 25 years as a furniture restorer and cabinetmaker he decided to make pipes. He has dedicated himself to bringing his pipes to the market, which allows him to share the unique feelings that a pipe can give.

An excellent selection of Ashton pipes is available at Pipedia Underwriter, lepipe.it