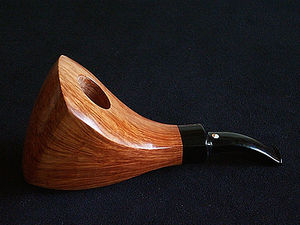 In the world of ever escalating dichotomy, Gloredo seemed to have found a peaceful solution.

Deeply inspired and aspired by the ancient philosophy ingrained with our ancestry, Gloredo, founded by Leslie Ng with his partners in China, has discovered the perplexities between smokability, originality, creativity, bohemia, being Oriental ... the list goes on, and the other side of Das Auge ißt mit, conservation, tradition, conformation, as well as being Occidental, etc., naturally dissipate. Abiding by the principal of Yin-yang, together with the very old world Glory (where "Gloredo" comes from. "-Do" means "hall", "institution", or "parlor") in craftsmanship we inherit, further contribute to and keep learning from, Gloredo comes to The Way towards the culmination, or accurately, the Golden Mean, of making the finest smoking instruments, and even more importantly -- serenity in mind. 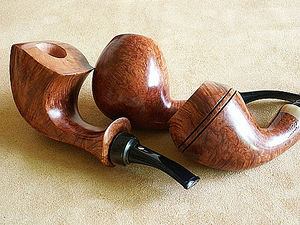 Whilst I was a child, my grandmother always told the stories of a highly intelligent scholar and major official named Ji Xiaolan, in imperial Qing Dynasty, outwitting his venomous opponents and thereby protecting the emperor. One detail my grandmother brought up many times was that he always smoked a fine Kiseru, whenever he contemplated and deployed wise tact, certainly also as he almost always won, like a cliché.

The impression of associating wise men with Kiseru, was permanently imbued to me, as a child.

As I grew up, I began to smoke pipes, probably for this subliminal reason.

While smoking most briars and meerschaums, compared with the slender and exquisite Kiserus, I inevitably realize something goes wrong, or at least, not utterly right with them. Finally, I came across why – the regular shapes of our pipes, all become Chubbies ... to me.

Influenced by traditional Chinese and Japanese Kiserus, we always attempt to make a stretched shank for our pipe. 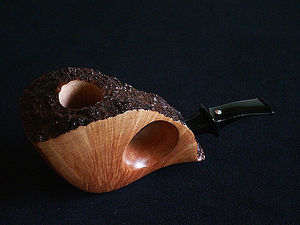 Unlike the infamous vulgarity of a stretched limousine, a stretched shank carries plenty of invincible merits. Not only does it immensely enhance the aesthetics of a pipe, which is obvious, but optimizes the smoking quality as an intrinsic value, to a large extent, if we investigate. The phenomenon of condensation, is caused by many culprits, such as transitions through-out the entire airway, and the engineering of the smoking chamber. But as we make them all right, then it all boils down to the length of the shank. As we craft a prolonged shank for a pipe, condensation is minimized, since the abrupt transition of material, from the wood, which is inert in conducting heat, unto otherwise the bit, is relieved, and the moisture of smoke is further absorbed and tampered, by the adorable lengthened wood interior. As a pleasant result, we enjoy cooler puffs and best avoid unpleasant tongue bites.

A pipe with stretched shank provides pragmatic benefits for good smoke, though it also exponentially increases the risks of spotting new flaws that will frequently force a pipe maker downgrade the pipe in various ways, or worse, even make them end up as discards.

Based on the rationales, Gloredo makes as many pipes with beautiful stretched shanks as we can, ignoring the higher costs entailed during the quest. Just as many other things in life: there're actually very few shortcuts or tricks in achieving something. 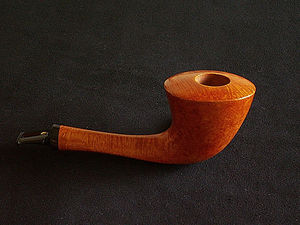 Gloredo works solely with the finest seasoned Mediterranean briar, most of them plateaux, in making our pipes. German ebonite or acrylic, as well as Delrin, are used, for crafting mouthpieces and tenons respectively. We also choose a wide array of complimentary natural material, such as buffalo horns, bamboos, and sterling silver, gold, jade, selected animal bone, as well as teeth, in adorning our pipes.

Each Gloredo pipe is created, only by hand, following the ancient Yin-yang philosophy. Both well-considering the briar itself and our inclination for a proper, aesthetically pleasing shape, we do not go either extreme of allowing the grains of the wood completely dictate the shape, as opposed to blind-folding ourselves without respecting the briar. 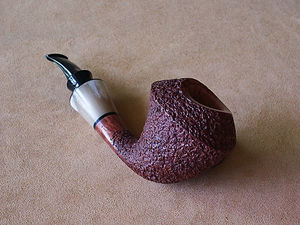 After carefully observing the unique characteristics of the briar block, predicting the traits beneath with experience and instincts, we begin to unravel the block into a pipe, with brains, with adroit hands, and with our hearts. We use simple tools, mostly medieval hand tools such as a small band saw, files in various specifications, and sand papers from 200 through 2000 grits, after drilling the chamber, mortise, and the dead-centered airway, with an old-fashioned lathe. We do not take mouthpieces lightly since we believe in that a good stem contributes at least half of a handmade pipe's entire value. Painstakingly while rewarding, a well made mouthpiece gradually comes into being, from a raw solid rod. For the ones that deserve to bear the Gloredo name, we combine briar and another devoted material, into a Taichi totem, which stands for Yin-yang, and further inlay the mosaic into the stem by hand. Finally, we finish the pipe with alcohol-based stains, natural dyes, and a combination of proprietary ingredients, then carnauba wax it, in bringing a new smoking beauty, with her own soul and characteristics, into life.

Note: Leslie Ng has developed the Gloredo mark and brand since starting out in 2007, and it is his fine work and integrity that have built Gloredo's excellent reputation in the pipe community. Recently a small shop owner in China named Chi Chang made an attempt to take over the Gloredo brand by registering it in some markets. It is unclear what Chang's intentions are at this point, but it appears to be either malicious or perhaps opportunistic in nature. See the Talk:Gloredo for more information.