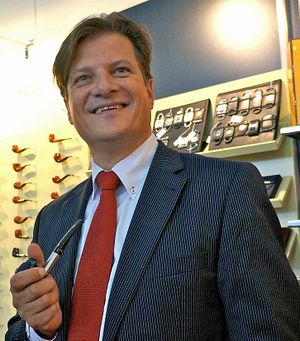 With the help of his family the father of Elbert Gubbels Sr. started a retail shop for tobacco pipes and other smoker's equipment in 1870.

In 1924 Elbert Gubbels Sr., now father / grandfather of the present owners, transformed it into a wholesale trade business. The company grew steadily and imported pipes from various countries as there were no factories producing briar pipes in the Netherlands. The most important suppliers came from France and England.

When German troops occupied the Netherlands in May of 1940, a period of almost five years began in which the Gubbels family could hardly operate their business at all. During this years of forced rest Elbert Gubbels had a notion to become independent of foreign suppliers and he drew up plans to start his own production of tobacco pipes after World War II.

Immediately succeeding the war it was very difficult to obtain good pipes for the import of foreign pipes was limited and so the time was right to go for something new. In 1946 he launched pipe production at Godsweerdersingel No. 20 in Roermond with a couple of new machines and some workers, a couple of them being foreign specialists and considered himself to commence. Yet the cramped accomodations and the needy equipment of the workshop showed the limits all too soon. It was obvious that the workshop was inadequate and Mr. Gubbels invested in another building covering an area of 900m² that also offered a sufficient warehouse. Now the production could be increased going hand in hand with developing new models and improving the quality of the pipes being produced.

The production grew steadily but it showed now that an "international" brand name was required for further expansion on international markets - obviously no one cared too much for pipes made in the Netherlands. Feeling that the time involved to get a new brand established was too lengthy, Mr. Gubbels bought a small trade company in Amsterdam which owned all the rights to the brand Big Ben and was already well established in other countries selling pipes among other goods. A real happenstance - Gubbels products could be marketed now in all European countries, the USA, Canada and many other countries, and nowadays they can be found in almost every country world-wide.

In December 1972 the company opened new and very modern factory in Roermond at Keulsebaan 505. With the official opening by the Governor of the Province of Limburg, the Gubbels company was, on behalf of Her Majesty Queen Juliana of the Netherlands, granted the title "Royal" so that the official name became: Elbert Gubbels & Zonen - Koninklijke Fabriek van Tabakspijpen (Elbert Gubbels & Sons - Royal Dutch Pipe Factory).

In honour of this title, a new brand was designed and named Royal Dutch. This brand was also created, to negate the belief that Big Ben was of English origin.

At the end of the 1970's, there were only two briar pipe factories in the Benelux countries: Gubbels in the Netherlands and Hillen in Bree, Belgium. When the latter encountered major financial difficulties in 1980, Gubbels bought the company together with its brand Hilson - a well established brand, which was selling better on the most important German market than Gubbels' mainstay Big Ben. The factory in Bree was closed soon, so Gubbels is presently the only briar pipe producer in the Benelux countries. (Exept less than a handful of pipemakers!)

More recentely Gubbels got known as producer of the Porsche[1] and Bugatti design pipes. Elbert Gubbels & Zonen B.V. is one of the worldwide biggest pipe producers today. Annually 250,000 - 300,000 pipes are made by ca. 60 employees. More than 70% of the production is exported.