Not much is known about Israel's sole pipe factory though it's reported to have operated quite successfully on international markets. 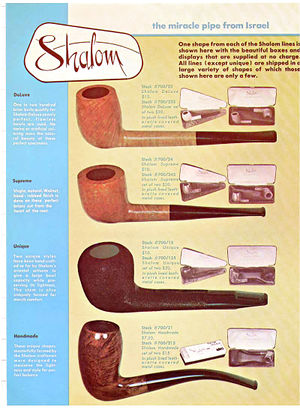 Beside the brand "Shalom" the mainstay brand was Alpha - especially well known in the USA. Alpha was popular for a range of fresh and unusual shapes. Series (afaik): Caprice (s), Citation (s), Classic (b), Pedestal (s), Regent, Region (b), Rex (s). (1)

Alpha also produced at least one of its Citation forms for Carey's "Magic Inch" series.

Mentioned in context with Shalom Pipe Factory was a Danish pipemaker named 'Muki Liebermann', who later lived and worked in the USA. Muki is known for his unique briar bending technique and his original shapes that gave inspiration to many of the most praised Danish pipemakers.

Other brands from Israel: