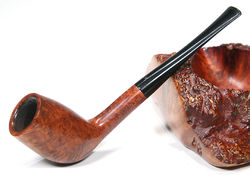 The name Tabago has been used twice:

Torben Hetler, a former Stanwell employee who first produced the Torben Dansk line of pipes, is credited with also producing a line of Tabago pipes stamped "Handmade in Denmark" in the early 1970's. These pipes were sold next to other manufacturers brands (Danmore, Torben Dansk e.a.) in the 1972 cataloge of Dan Pipe (originally named "Danske Pibe"), a pipe and tobacco mailing enterprise established by Heiko Behrens. Among other lines Tabago produced a pipe stamped "Cap Belton" and another stamped "Gigant". Little is known about Tabago pipes, which were produced for only a few years, but Dan Pipe even today refers to the Tabago and Torben Dansk lines as connected (Torben Dansk/Tabago) so at least this much is known.

Tabago's logo is an outlined equilateral triangle on the stem. Often the pipes sport very tall bowls, fitting with the Dan pipes of that era, and some were marked with shape numbers.

Tabago is the more recent brand of Bård Hansen, Norway's sole contemporary pipemaker. He learned his craft for a while at G. Larsen's pipe factory Lillehammer in Lillehammer and is working now from his workshop situated at Bryggen in the centre of Bergen.