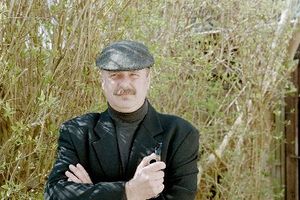 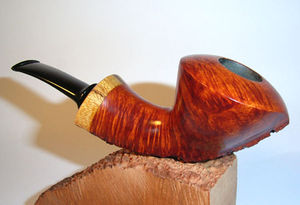 Thomas Richard Mehret lives and works in the most northerly part of Germany, a short distance from the giant "pipe neighbor", Denmark. The final forty is an architect graduate (as a number of well known carvers are) and an enthusiastic pipe smoker. Numerous visits with Danish pipe makers, e.g. Poul Winslow, who is very popular here in Germany, induced him, like many other pipe enthusiasts, to try making a pipe for himself. For that reason, in 2001 and 2002, the first pipes then arose for personal use.

In spring 2003, Tom started to form hand made pipes using a sanding disk and making them accessible to the public through eBay Germany, where I first saw his pipes. In the meantime, he has become an internationally recognized member of the pipe making community through his industriousness and determination. 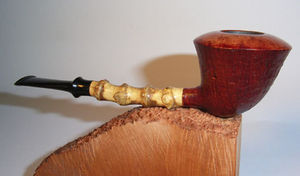 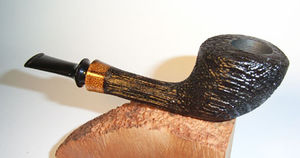 Thomas lives just this side of the German Border. He therefore calls his pipes "Danish Border hand made Pipes." As I mentioned above, he at first presented his pipes to the public through eBay Germany. His pipes immediately found the desired attention and were topics of extremely positive discussions in appropriate Internet forums. In the autumn of 2003, Tom sent three of his pipes to me to show to some pipe enthusiasts and fellow-collectors, on the occasion of the pipe world championship in Barcelona. The sentiment was positive, without exception. 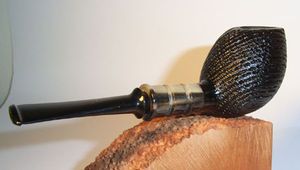 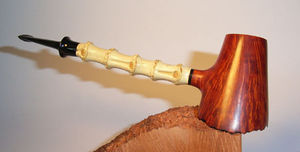 Tom is always willing to perfect his pipes and is always open to trying something new. He isn't discouraged by sharp reviews either, but understands the criticism as help. This is not always usual in the "pipe job". However, it can be helpful to respect the customer, and Tom has put this to good proof. If one may speak to such a young career of early pipes at all, then these early pipes were very robust anyway. They absolutely had approval recognized by the umbrella-stand, like Poul Winslow's models, which are in high demand in Germany.

The current pipes of Tom Richard, which originate from the excellent Danish style, are considerably more filigree and much more sweeping. The processing is excellent, without exception. The pipes are good-natured smokers and therefore are not only beautiful, but of good everyday suitability. The smooth pipes often have very beautiful grain and the finish of the rustic pipes are beyond any criticism. Tom always makes very beautiful stems. He often makes attractive decorative rings of boxwood, roseswood or snakewood. He also likes to work with shank applications from different precious materials. He has, moreover, perfected a very beautiful and fine way of rustication.