Kerry S. Wathen was a pipemaker who worked for a small pipe shop in south Kansas City called "The Briar Patch" in the 1970's. Tending to larger sized pipes his centerpiece was a huge briar calabash shape. When the Briar Patch closed he probably moved to Iowa where his pipes were available at David's Briar Shop in Des Moines (ca. 1977 - 1980/81). 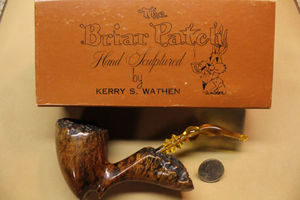 Wathen was having some problems with his hands at that time and was finally forced to give up his talented carving.

He usually inscribed his pipes with his name and two digits for the year of production like "Wathen '75". The best pieces were named "Reflection".