Difference between revisions of "Briarcraft" 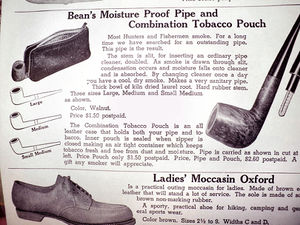 Add for L.L. Bean, including a pouch, and what is likely a Braircraft second, courtesy Doug Valitchka

Briarcraft Pipe Company was very prosperous between 1920 and 1940 and usually feature a diamond shield logo. They also produced a line of seconds under the following names: Airo, Arcadian, Briarmeer, Smokemaster, Cavalcade, Hallmark, Sterling Hall, and Wimbledon. They closed their doors in 1950.

Briarcraft was started by Richard Kliethermes Sr. and located on Pipetown Hill Rd, Spring Valley, NY. It received its power from a dam on Hyenga Lake, later it moved to 66 Central Ave., Spring Valley, NY. At first it was housed in a 2 story frame building and later a 2 story stone building was added. Upon the death of RK Sr., business was run by Richard Jr, between 1920 and 1940 it was second in size to Frank Medico pipes. All the briar root was imported from Africa, with the start of WWII, imports stopped and a briar like root was imported from S. Carolina. Richard Kliethermes Jr. was the inventor of a pipe known as Smokemaster, which used a doubled up pipe cleaner in the bit to absorb tobacco juice. With the decline in business during WWII and the following 5 years it closed its doors 1950.

They also manufactured Tuffies pipes, as seen by the following store display board for use in the Waller Specialty Co. store, in Minot, ND (closed in 1948).